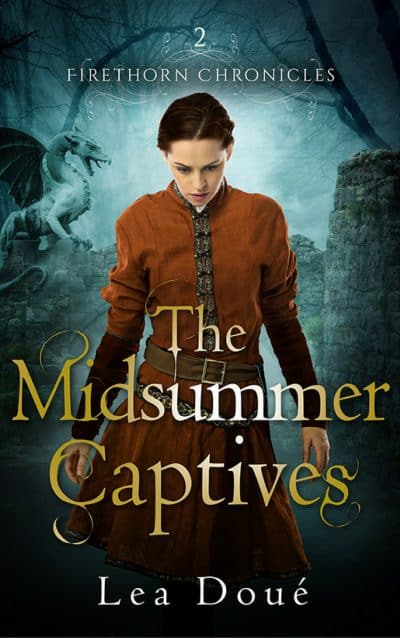 Imprisoned deep in the forest, Princess Gwen and her companions must find a way past enchanted guardians while contending with a love potion gone awry and a treacherous beauty on a mission of her own. A stand-alone novel and second in The Firethorn Chronicles.

A sorcerer’s fortress. A lost heir. A determined princess.

Princess Gwen, second in line to the throne of Ituria, has given up on happy endings. After a neighboring kingdom’s heir stole her heart and then disappeared four years ago, she buried her heartache and vowed to serve her eleven sisters. Her most recent mission: to arrange a match with her sister Hazel and the lost heir’s youngest brother.

But when her traveling party is ambushed, her flight from danger leads her into the path of a blindfolded man with a familiar smile. Imprisoned with him deep in the forest, Gwen and her fellow captives are at the mercy of a treacherous beauty on a mission of her own. Contending with her schemes—and a love potion gone awry—they must find a way past enchanted guardians, who are capable of crushing not only their bodies but also their dreams.

The Midsummer Captives, inspired by Shakespeare’s A Midsummer Night’s Dream, is the second stand-alone novel in The Firethorn Chronicles, a series drawn from fairy tales and other classic stories. Follow the sisters on their adventures in a land where sorcery is feared, women can rule, and dragons fly.