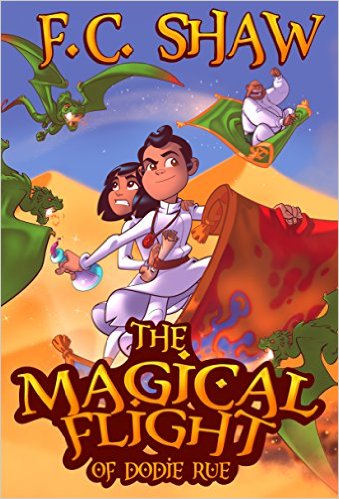 The Magical Flight of Dodie Rue

In a land of fortune telling, alchemy, and magic carpet racing, Dodie Rue must overcome his fear of flying, outsmart the other racers, and win a race with no rules in order to win a genie and rescue his brother from the grip of death!

From the author of the #1 bestselling Sherlock Academy series

A Race with No Rules.

In a land of fortune telling, alchemy, and magic carpet racing, Dodie Rue feels out of place. Dodie wishes he could be more like his brother Taj, everyone’s favorite pick to win first place in the upcoming Grand Flyer. But Dodie doesn’t have the nerve or stomach for racing, and the town bully Atallah won’t let him forget it.

With the race just a few days away, Taj is suddenly poisoned by an unknown opponent. Now, with only seven days to live, Taj’s only hope is for Dodie to win the race and its grand prize: a wish from a genie.

But the desert is a treacherous place with ghouls, sandstorms, and dragons around every dune. In a race with no rules, can Dodie overcome his fear of flying, outsmart the other racers, and rescue his brother from the grip of death?