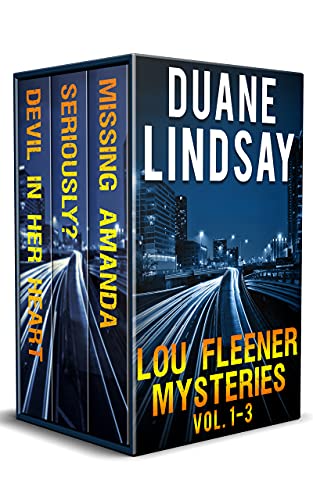 He’s short and not so good-looking and maybe not the best dresser, but he can fight like Ali and dance like Astaire—and solve the oddest collection of crimes you’ve ever imagined. Meet Lou Fleener, Private Eye.

He’s short and not so good-looking and maybe not the best dresser, but he can fight like Ali and dance like Astaire.

And solve the oddest collection of crimes you’ve ever imagined. Lou and his best friend Monk are here with their first ever collection of three best-selling novels full of suspense, thrills, romance and a lot of humor.

Lou and Monk get hustled into finding the kidnapped daughter of Chicago mob boss, Duke Braddock. Thing is, there’s no kidnapping, there’s no daughter. It’s all a scam to still up a gang war to get Braddock’s guy named mayor.

Monk’s got the brains, Lou’s got the moves and newcomer Cassidy Adams provides the looks.

There will be action and the most satisfying ending you could ever want when Lou and company actually find . . . the missing Amanda.

Lou and Cassidy are hired by an elderly survivor of an infamous Nazi death camp. She swears her new neighbor was a guard there.

So now they’re up against a gang of ruthless killers who shouldn’t even exist. Add a gun-toting crook who thinks Monk cheated him at cards, and a new lady for the ever-awkward Monk, and you’ve got a thriller filled with the usual fights, humor and romance.

Monk’s in a lot of trouble. Grabbed by and beaten by a revenge-seeking killer, stripped of all their money. Lou and Cassie are caught flat-footed when they’re suddenly broke.

He’s in California, they’re in Chicago. With no money and no idea where he is, can they rescue their friend and get back what’s theirs?