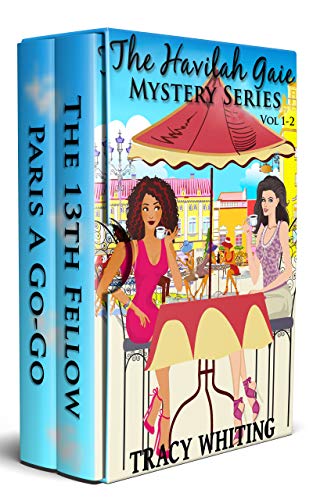 A two-part cozy armchair adventure, but with a bit of action-adventure bite.

The 13th Fellow
Against the panoramic backdrop of the Cassis cliffs of Provence, France, the beautiful people of poetry—poets, academics, and patrons of the arts—are assembling at a centennial honoring the founder of the Félibrige Foundation. Finding itself with a surplus of talent, the Foundation has awarded one more than its customary dozen fellowships, but even before the gathering can get underway, the unlucky 13th fellow has fetched up dead.

But what’s the motive? Professional jealousy? Romantic rivalry? Or something to do with a dark secret about the Félibrige’s founder? Havilah’s at the center of the mystery, and so is Thierry Gasquet, a dashing French agent who doesn’t care much for amateur detectives.

A specialist in several academic disciplines, fluent in several languages, honored for her academic achievements by the Ordre des Palmes Académiques, and equally appreciated for her accomplishments in filling out a bikini, Havilah is shocked by her colleague’s murder and determined to ferret out the truth. But she’ll have to stay a few steps ahead of Gasquet, who’s been assigned to protect her and avert an international scandal.

Paris a Go-Go
When a right-wing media personality is fished out of the Seine, two extremist factions start shooting at each other. Havilah, aka La Belle Américaine, has become a darling of the Parisian media, cast in the role of the voice of the left-wing American intellectual. Both groups try to use her as a pawn in the power struggle, and, after two more killings occur in her very presence, she becomes a suspect as well as a target.

Protection is close at hand, however, in the person of her current romantic interest, Thierry Gasquet, the handsome and debonair French police agent who protected her as a key witness during a murder investigation three months earlier.

Luckily, just as things are reaching the boiling point, Havilah’s Aunt Neet swoops in for charming, light-hearted comic relief—as Havilah and Thierry, now unsure of whom to trust in his agency, work together to solve the mystery—and do a little butt kicking.