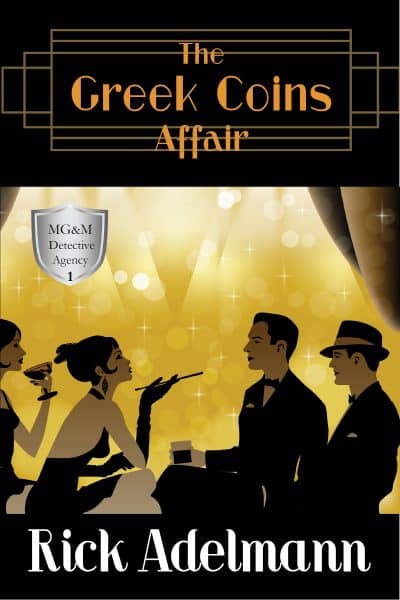 Garth Sherwood, a Pinkerton detective in the 1920s, team up with former Major James Mallory and his wife, Anneka, to form the MG&M Detective Agency. Delightful mysteries!

A fortune in stolen antiquities, a bag of loose diamonds, and two dead men. It’s bitter cold in February, 1918, when Pinkerton detective Sherwood Garth is assigned to team up with Major James Mallory. Their job is to ferret out the missing diamonds, but when the trail leads directly to a dead body in an abandoned barn, the two men join with the Cleveland Police Department to solve both the murder and the question of the gems.

They discover no shortage of suspects. The dead man, Henry Spellman, seemed disliked by family and colleagues alike. Could the killer be one of the adventurer’s traveling companions? Or perhaps one of Spellman’s own sisters or a member of the household staff is behind his death? And then there’s Henry’s flapper girlfriend, who is maybe a little too chummy with other men. Nearly everyone, it seems, has a motive and most had the means to carry out the crime.

The search takes the two detectives into the local jazz clubs, where Garth seems at home and Mallory sees a whole new world beyond his Army experience. It’s truly a by-the-book whodunit using the Pinkerton man’s keen skills of observation and the military officer’s pure brawn. When they put the clues together, the revelations come as a surprise to all. Perfect for fans of classic detective stories from Agatha Christie and Arthur Conan Doyle.