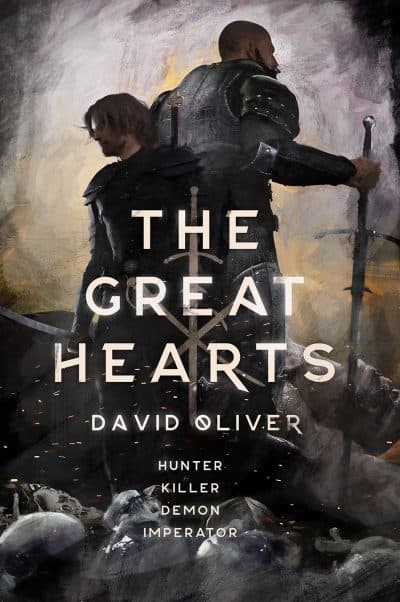 Calidan Darkheart is an Imperator, a self-professed killer, and an adept hunter of the creatures that most citizens of the Empire do not realize exist. Together with his hulking companion Cassius, he hunts the beast that slaughtered their home village.

“I am what the Emperor made me. Monster.”

Calidan Darkheart is an Imperator, a self-professed killer, and an adept hunter of the creatures that most citizens of the Empire do not realize exist. Together with his hulking companion Cassius, he hunts the beast that slaughtered their home village.

Pity those who find themselves in their path.

Once, Calidan and Cassius were bright young boys, living peaceful, happy lives until the day everything changed. Embarking on a journey of survival, they face adventure fraught with danger, strange magic, and dark deeds. Unbowing and undaunted, they push forward, striving for power, making lifelong friendships along the way, and above all else, discovering the truth behind the magnificent, mythical Great Hearts.

Young Calidan is a boy full of hope and courage, driven by the past but not ruled by it.

Old Calidan is a bitter and twisted killer of monsters and men, his past haunting his dreams.

This is his story.

The first installment of a new series, David Oliver’s debut novel features morally ambiguous heroes, mythical beasts, and strange magic in an unputdownable, grimdark, coming-of-age adventure, following in the footsteps of authors such as Mark Lawrence, Joe Abercrombie, and Brian McClellan. Pick up a copy today and be enraptured by The Great Heart’s melding of gritty, vivid action with the soft, warm purr of a gigantic panther.

“Action scenes so well described you would swear you can feel the swish of the blade, the bite of the edge . . . up there with Kings of the Wyld and Blackwing.” —The Book Wyrm Speaks

“I know for sure that Mr. Oliver has a bright future as an author. The story he wrote in The Great Hearts is nothing short of fantastic. The story that he tells however was even more impressive . . . the narration was spot on. As a narrator I would put him in my top 5 favourites alongside Michael Kramer, Kate Redding, Nick Pohdel and Wil Wheaton.” —Jetpacksndragons

“What Mr Oliver has done with this story and the characters within is nothing short of wonderful . . . it puts to shame some big name authors.” —Two Bald Mages (Keith)