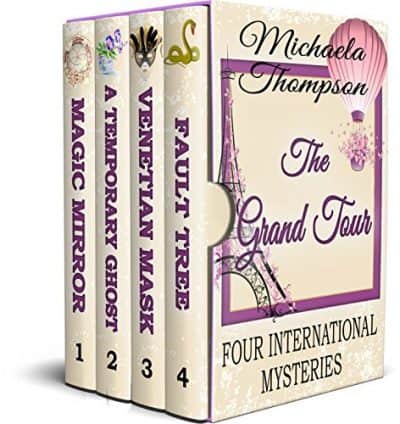 Armchair travelers who happen to love cozy puzzlers won’t be able to resist this deal. Four of Michaela Thompson’s delightful international mystery novels—set in France, Italy, and India—each featuring bright and funny leading ladies, are on sale as a box set.

Take the grand tour! Cuddle up and enjoy these exotic and thrilling adventures one after the other.

Magic Mirror
Sacre bleu! They killed a man for a mirror!

Florida transplant Georgia Lee Maxwell doesn’t take to Paris at first, despite the fact that she’s at least leaving a no-good man and a hated job as a society editor. Now she’s a Paris correspondent, thank you very much—a dream come true for any journalist.

There’s just a slight down side—she arrives in freezing rain, gets caught in a traffic jam caused by a bomb scare, and hates her apartment; but the real Bonjour is finding herself face down on a museum floor during a robbery. Three terrifying masked gunmen shoot the unfortunate security guard and make off with only a mirror. Does it have some prophetic ability? Does someone know something the gendarmes don’t? Here’s what Georgia Lee knows: If she finds out first, she’s a journalistic hero. If she doesn’t, she’s dead.

A Temporary Ghost
A ghost-writing gig in Provence—she’s living the dream! Until the killing starts . . .

In journalist Georgia Lee Maxwell’s second adventure, she leaves her new home in Paris for Provence, where she’s been offered a lucrative ghost-writing job. But her co-author, suspected murderess Vivien Howard, the widow of a wealthy New York financier, seems strangely uninterested in writing her memoir Vivian was widely believed to have murdered her husband but was never charged with the crime, and now she promises to tell all.

Amid the beauties of Provence, settled in, a charming renovated farmhouse, Georgia Lee finds a household full of ill-feeling, not to mention suspicious characters. Frustrated by Vivien’s lack of cooperation and unnerved by threatening letters, Georgia Lee soon realizes that she has become a player in a more dangerous game than she could have imagined. And then there’s another murder.

The surreal splendor of Venice glitters and mesmerizes as six so-called friends who, it turns out, barely know each other, meet at Carnival to play a malignant game that quickly turns murderous. Sally, the “Tallahassee lassie” spurned by the rest as a virtual hayseed, is swept up by a mysterious count, attending masked balls, operas, and Carnival revels even as she mourns her marriage and dodges a deadly pursuer. “Things should happen at Carnival,” says her unlikely protector, who resembles Harlequin in more than his costume. “If they go on just the same, there’s no reason for Carnival at all.” There’s absolutely no chance of that in this psychological tour de force of surging identities wrestling to emerge in people forced by violence to confront their inner Harlequins and Medusas.

“Placing blame” thinks Marina Robinson, “is my life’s work. And why?” There’s a lot in her past to account for—nightmares and terrors, crimes and betrayals that happened half a world away, ten years go. Now she’s an engineer with a great job. She’s a failure analyst, an investigator who figures out what causes accidents, and she’s working on her most fascinating case—the fatal crash of a roller coaster—when suddenly the phone rings. And her world tilts . . .