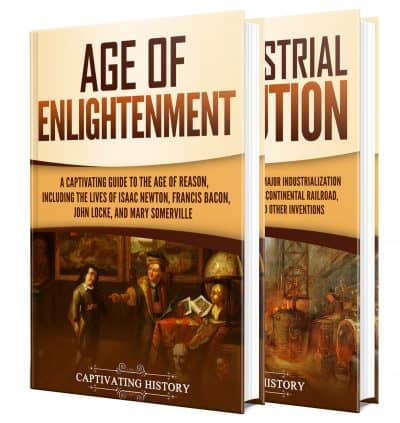 The Enlightenment and Industrial Revolution: A Captivating Guide to the Age of Reason and a Period of Major Industrialization

Two captivating manuscripts in one book:

Age of Enlightenment
A Captivating Guide to the Age of Reason, Including the Lives of Isaac Newton, Francis Bacon, John Locke, and Mary Somerville

The Industrial Revolution
A Captivating Guide to a Period of Major Industrialization and the Introduction of the Spinning Jenny, the Cotton Gin, Electricity, and Other Inventions

The life of an eminent scientist during the Scientific Revolution and the ensuing Enlightenment was not easy. Ambitious people were killed in the name of the Catholic Church for their scientific and philosophical works, which were often viewed as heretical. As time went on, however, and the truths of scientific research and exploration showed themselves time and time again, the collective perspective of the population began to shift away from religious dogma toward the logical scientific method.

The Enlightenment gained traction in the 17th century, and more emphasis was given to scientific techniques in the schools, as well as to the separation of religious and scientific data. Religious philosophies also became less rooted in the exact words of the Catholic Church, as papal authority gave way in many European countries to splinter groups of Christianity, such as the Calvinists, Lutherans, and other types of Protestants.

Major figures of the Enlightenment period include Voltaire, Isaac Newton, John Locke, Thomas Hobbes, David Hume, Jean-Jacques Rousseau, Adam Smith, Immanuel Kant, and Thomas Jefferson. These and many other great thinkers of the era influenced mass social upheaval in pursuit of equality and human rights, and many historians consider the culmination of these efforts to have been the French Revolution of 1789.

It could be argued that the Industrial Revolution is one of the most critical events in human history, worthy of every atom of our attention. Learning about it will undoubtedly allow us to better understand our past and the world we live in today. The second part of this book will attempt to explore all the aspects of the Industrial Revolution, from its development and evolution to its numerous and various effects on humankind.

If you want to learn more about the Enlightenment and Industrial Revolution, get this book now!