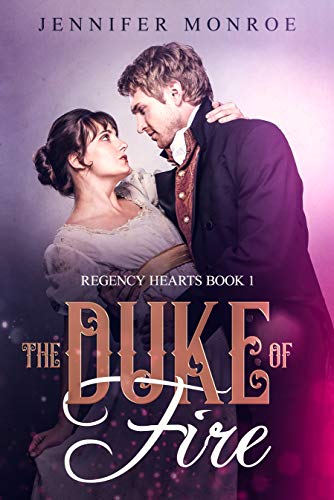 All Fairy Tales End with a Happily Ever After . . .

Having endured the roguish ways of men, Miss Jane Harcourt has decided life would be better if she were to remain a spinster. Working as a governess has brought her fulfilment—that is, until she is suddenly relieved of her position. When her cousin alerts her that a duke is seeking a governess for his son, Jane is overcome with joy. Then she learns that the Duke of Fire is believed to have murdered his wife . . .

Michael Blackstone, Duke of Hayfield, knows all too well the rumors surrounding his wife’s death. For years, he has remained isolated inside his home with his son, allowing his misery and the guilt of her death to consume him. When the latest in a string of governesses leaves his home, he sends word in hopes of finding anyone who will risk being in his employ.

Desperate for employment, Jane agrees to a position as governess, but once she meets the duke, she cannot help but wonder if there is any humanity left in him. As times progresses, Jane begins to see a different side of the infamous Duke of Fire, for she sees a man who is overcome with guilt and grief. Can love be enough to save the man from himself?

For Michael, Jane has brought more than excellent teaching into his home; she has also brought hope into an otherwise dark life. Finding the woman intriguing and enjoying her company, his feelings for her blossom, though he fears his guilt for the fire that claimed his wife may be the very thing that ends his as well . . .