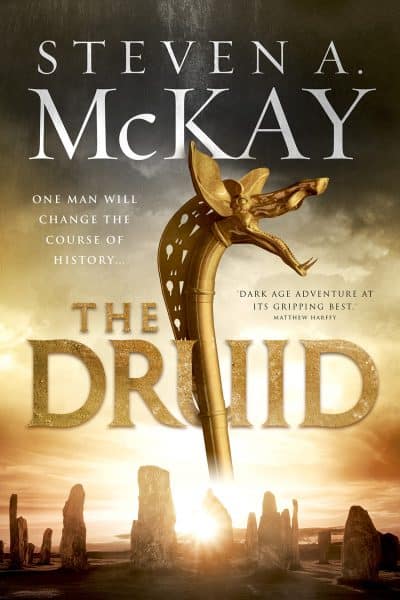 by: Steven A. McKay

The start of a thrilling series, The Druid is perfect for fans of Bernard Cornwell, Simon Scarrow, and Griff Hosker. With his war-dogs by his side, Bellicus of Dun Breatann must hunt down the men who abducted Princess Catia before their bloody plans can be completed . . .

A land in turmoil. A village ablaze. A king’s daughter abducted.

In the aftermath of a surprise attack, Dun Buic lies in smoking ruins and many innocent villagers are dead. As the survivors try to make sense of the night’s events, the giant warrior-druid, Bellicus, is tasked with hunting down the raiders and thwarting their dark purpose.

With years of training in the old ways, two war-dogs at his side, and unsurpassed skill with a longsword, Bellicus’s quest will take him on a perilous journey through lands still struggling to cope with the departure of the Roman legions.

Meanwhile, amongst her brutal captors, the little princess Catia finds an unlikely ally, but even he may not be able to avert the terrible fate King Hengist has in store for her.

This, the first volume in a stunning new series from the bestselling author of Wolf’s Head, explores the rich folklore and culture of post-Roman Britain, where blood-sacrifice, superstition, and warfare were as much a part of everyday life as love, laughter, and song.

As Saxon invaders and the new Christian religion seek to mould the country for their own ends, one man will change the course of Britain’s history forever. . .

“Steven A. McKay’s archetypal villains and heroes step vividly onto the page from a mist-veiled past of legend to battle for the life of a princess and the fate of Britain. Dark age adventure at its gripping best.” —Matthew Harfy, author of The Bernicia Chronicles

“The Druid is richly imagined, confident and gripping, full of memorable characters that fair leap from the page, and with a protagonist who, despite his calling, is written with just the right mix of the earthly and the unearthly, the spiritual, and the realistic . . . instantly engaging storytelling on a par with anything you’ve read before by him there Cornwell, or Kane, or Kristian . . . a triumph, an honest to goodness, self-assured triumph.” —Steve Denton/Speesh Reads

“The Druid tells a story as stunning as the cover art suggests.” —Sharon Bennet Connolly, author of Heroines of the Medieval World

“The historical detail is seamlessly melded into a plot bursting with adrenaline and suspense . . . To my mind, this novel is everything historical fiction should be and more.” —James Vella-Bardon, author of The Sheriff’s Catch