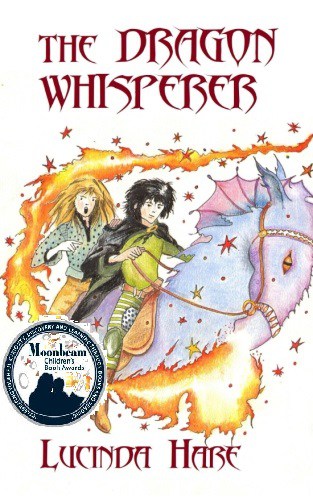 The Dragon Whisperer: Imagine you could talk to dragons . . . (The Dragonsdome Chronicles Book 1)

The Dragon Whisperer follows Earl’s daughter (and dragon whisperer), eleven-year-old Quenelda. Her best friend is a battle-dragon with the comically cautionary name of Two Gulps and You’re Gone, who she can command through thought alone.

A tale hatched from Hare’s real-life experiences and devotion to all kinds of animals, The Dragon Whisperer follows Earl’s daughter (and dragon whisperer), eleven-year-old Quenelda. Her best friend is a battle-dragon with the comically cautionary name of Two Gulps and You’re Gone, who she can command through thought alone. Hare offers a headstrong heroine in Quenelda that chooses dragons over dresses, battles over boys, and ultimately dreams of joining her father’s side as a warrior in the Stealth Dragon Services.

Don’t be fooled though . . . just because Hare has chosen a young girl as her protagonist doesn’t mean she has written a book solely for that gender. Yes, the tale flies in the face of books such as Harry Potter and Artimis Fowl that have strong male protagonists, but The Dragon Whisperer contains enough dark magic, fierce battle dragons, and slimy hobgoblins to appeal to young boys.

Regardless of gender, readers will root for the underdog (a young gnome named Root) and wish they had their very own dragon. On the surface, Hare describes the relationship been Quenelda and Two Gulps like that between horse and rider, but the dragons are given such a depth of history and behaviours, that after the book is shut, the reader half expects to see these beasts lurking in local paddocks.

The one letdown of Hare’s work, is that, in marketing it towards children, adults might see it as “just another children’s book” and pass it over. The back cover boasts a 9+ age rating, and I urge anyone nine or over to snap this read up. Verdict? A battle-dragon of a book!

“One of the most captivating new books to be published for 8+ for some time . . . It made me laugh, cry and remember exactly what’s so special about the time when you or your child live in hope of finding a dragon of your own.” —Amanda Craig, The Sunday Times

“Reading Lucinda Hare’s debut novel The Dragon Whisperer is like riding a dragon. You have to hold on tight during the twist and turns, take time to stop and enjoy the breathtaking view, prepare yourself for the sudden lows, enjoy the soaring heights and make sure you’re not on the wrong end of that fiery breath!” —Fantasy Book Review