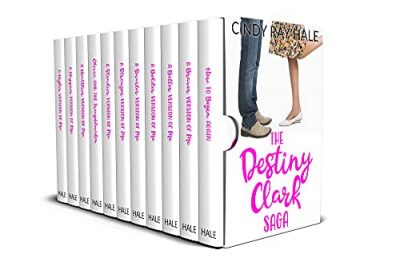 Mormon girl Destiny Clark has a big crush on the off-limits headmaster’s son of her Baptist school. When they are cast together in the school musical, sparks begin to fly. Will she be able to keep her parents’ rules and stay away from him, or will love rule the day?

Eleven YA Sweet Romance Stories in One!

How to Begin Again
Hannah can’t stop thinking about her toxic ex. Can the hottie next door help her learn how to begin again?

A Braver Version of Me
Shy Mormon girl, Destiny Clark, crushes on the headmaster’s son at her Baptist school. She’s not supposed to date outside her religion, so when he notices her, she worries she’s about to be in a lot of trouble.

A Better Version of Me
When Destiny gets cast in Les Miserables, she thinks all her dreams have come true. Only she has to sing her true feelings of rejection to her crush. If she can get her brother’s best friend to be her boyfriend, she can escape humiliation.

A Bolder Version of Me
Destiny’s forbidden boyfriend hates hiding so she agrees to go public with their relationship, only to have bullies emerge from all sides. Can they survive, or is their relationship doomed to fail?

A Smarter Version of Me
When Destiny’s parents discover her sneaking around with her boyfriend, her life takes a turn for the worse. They stage a breakup, but then his ex tries to get him back. Will Destiny be able to overcome her insecurity, or will she lose trust in him forever?

A Stronger Version of Me
When Destiny is struggling with her breakup her brother’s best friend becomes her strongest support. Is it time for a fresh start with a new guy, or is she making a huge mistake?

A Steadier Version of Me
Destiny’s ex wants to be friends, and they’re in the school musical together. Will she be able to keep her resolve when her heart is calling for him?

Olivia and the Troublemaker
Olivia, Destiny’s younger sister, overhears the school bad boy making a bet that he can convince her to kiss him. She’s not interested in his games, but he’s determined. Can she keep him at arms’ length, or will his charm win her over?

A Healthier Version of Me
Destiny messed up big time, and she’s not sure her boyfriend will ever forgive her. Her ex comes back into her life, and her parents have started to accept him. But will that only make things worse with her boyfriend?

A Happier Version of Me
With two guys fighting over her, Destiny’s heart can’t decide. So she chooses to be alone to clear her head. She can’t avoid either guy, so it’s only a matter of time before she’ll be forced to make up her mind.

A Higher Version of Me
Everything seems perfect in Destiny’s relationship. But when her boyfriend drops a bomb on her, she goes numb. Destiny doesn’t know if she can recover, or if she ever will.