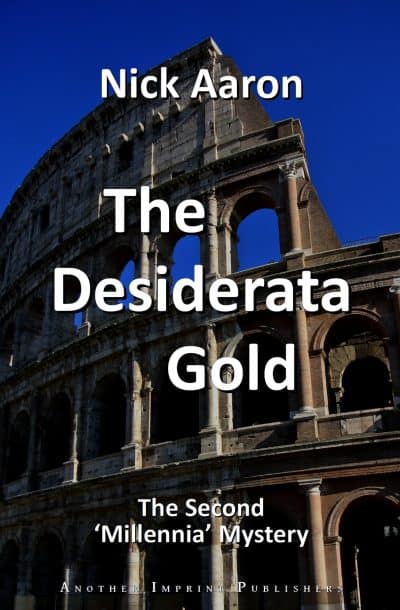 Blind sleuth Daisy Hayes goes to Rome, looking for an ancient gold cache, hoping to solve a new mystery, and, even more, to reconnect with Desiderata, her soulmate from antiquity.

In 1992 Daisy Hayes had inherited Bottomleigh House and was struggling to keep it afloat financially. Then she got a letter from an archaeologist asking her to help make sense of a mysterious message that had just been dug up in Rome. Time to hook up again with Morag, her deaf friend from the “project” in 1964, and to go back to the Eternal City.

In AD 64, after Feli’s death, Desiderata had scores to settle and a “twin sister” to bury. Her new friends the Christians gave her sanctuary, but her relationship with them was a bit strained. Soon the “Community” and their blind protégée had to part company. Eventually, assisted by her uncle Balbus, ex-centurion of the X Fretensis legion, she found a path out of her troubles, and helped him search for a stolen treasure.

So, 1928 years later, Daisy went looking for a gold cache from antiquity, hoping to solve a new mystery, and, even more, to reconnect with Desi, her soulmate from ancient Rome.