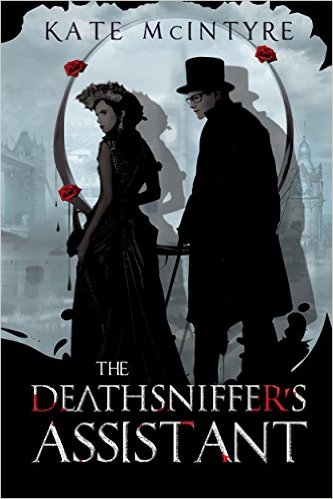 Impoverished gentleman Christopher Buckley is drawn into a world of murder and conspiracy after he begins working for Olivia Faraday, the eccentric Deathsniffer. His work with this manic lady detective takes him far out of his comfort zone—and brings him closer to truth.

(2) Moderate+
Log in to submit or change your own rating.
Click or tap each bar for more details

After losing his parents in the Floating Castle Incident, the sensitive and mannered Chris Buckley has spent six years raising his magically talented little sister, Rosemary, on the savings that his once-wealthy family left behind. But that money is drying up, and Chris finds himself with no choice but to seek out work in Darrington City as it spirals into a depression. The only employer willing to consider his empty résumé is Olivia Faraday, the manic Deathsniffer. Olivia’s special magical gift gives her a heightened intuition which makes her invaluable in hunting down murderers.

When a Duchess of the mysterious Old Blooded Nobility calls on Olivia to solve the mystery of her dead husband, Chris finds himself tangled in Olivia Faraday’s daily life and unable to extract himself from the macabre questions of the investigation. His involvement grows more complicated as political forces in Darrington close around Rosemary, seeing her as a tool that can be used to end the depression at the cost of her freedom—or even her life. Chris must juggle the question of who killed Viktor val Daren with the responsibility of keeping Rosemary and her magic safe from those who would use her up and toss her aside. Worst of all, he begins to learn that the national disaster that took his parents’ lives may not have been the accident it seemed.

Set in a world very similar to 1900s London, The Deathsniffer’s Assistant combines the investigative murder mystery with a tale of personal and societal redemption. It is about the relationships between broken people who clash more often than not, but manage to shape and learn from one another in spite of this. The story is told from the perspective of Christopher Buckley, young and impressionable and influenced by the prejudices of his time, as he finds himself surrounded by a cast of exceptional women whose differing characters will slowly reconstruct his understanding of strength in others—and in himself.