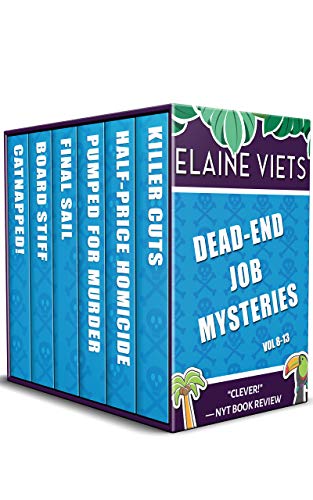 This funny and fresh cozy series—about a woman on the run from her cheating ex and her court-ordered alimony. Follow Helen Hawthorne as she takes one dead-end job after another, finding murder and mayhem along the way. Lots of laughs and great suspense.

Killer Cuts
Even though Helen Hawthorne is just a gofer at his upscale hair salon, she has to admit the fabulous Miguel Angel is a master at the craft of coif. But with great heads of hair come great headaches. Especially when Miguel and Helen prepare the pregnant fiancée of Kingman “King” Oden for her nuptials. When King tries to throw his weight around the shop, Miguel delivers a vicious dressing down—along with a killer threat. Which is why Miguel is named the prime suspect when King’s body is found drowned in a pool at his own wedding. Helen knows her boss might have a temper, but murder? That’s just not his style.

Half-Price Homicide
When Fort Lauderdale’s wealthiest want to discreetly trade their best barely-worn threads for cash, they bring it to Snapdragon’s Second Thoughts—which is where Helen finds herself selling the most chic secondhand clothing in Florida. But usual haggling turns homicidal when a particularly petty customer turns up dead and Helen’s boss Vera is eyed as a suspect. And while she would like to help, a sudden tragedy forces Helen to return to St. Louis—where she has the chance to face her past. If Helen doesn’t quickly deal with her fugitive status she won’t make it back home in time to prevent the police from making a very unfashionable arrest . . .

Pumped for Murder
Newly married, Helen can’t wait to life anew—and start an agency with her PI hubby, Phil. Her penchant for working dead-end jobs comes in handy when they’re hired to look into a fitness fanatic who may be cheating on his wife. Taking a receptionist job at their subject’s gym, Helen soon discovers that she has to start pumping iron if she wants to keep an eye on the weight-lifting lothario. With her past finally behind her, Helen is all set to start sleuthing for real. But if she wants to make a living of it, she’s going to have to do some heavy lifting . . .

Final Sail
As one half of Coronado Investigations, Helen is working full time alongside Phil. And after the surprising number of murders Helen helped solve while earning low pay on off the books jobs, anything else should be smooth sailing, right? Unfortunately, Helen’s unique work history also makes her a natural for undercover work—and in this case that means acting as a “yacht stewardess” to catch some smugglers. But after a member of the yacht crew disappears, Helen’s case quickly goes from simple smuggling to maritime murder. And if she doesn’t find out who pitched the man overboard, she might end up lost at sea herself . . .

Board Stiff
Helen and Phil are on the case when Jim Sandusky asks them to save his business. Because while “Sunny Jim’s Stand-Up Paddleboard Rental” is garnering a lot of attention, it’s not the kind the beachside business ever hoped to attract. There’s a local restaurateur who wants the land for a parking lot, a competing board rental place aiming to poach customers, and a gang of local politicos who just want Jim gone. And Jim wants Helen and Phil to find proof of dirty dealings. They don’t have to try hard, as it’s not long before a customer of Jim’s turns up dead—a murder Jim insists was set up to make him look bad. It’s up to Helen and Phil to prove it before Sunny Jim’s is sunk for good.

Catnapped!
If there’s one thing the very wealthy might value than their money, it’s their precious pets. So when a local socialite hires Helen and Phil to recover her beloved show cat from her ex-husband Mortimer, the case seems simple enough. But when the husband-and-wife PI team show up for the cat, they’re greeted by a murdered Mortimer. And the feline is nowhere to be found. To get the scoop on who could have committed the deed, Helen takes a job as a cat groomer. But as she navigates the cutthroat world of cat shows she discovers there is much more to the crime than just a purloined pussycat . . .