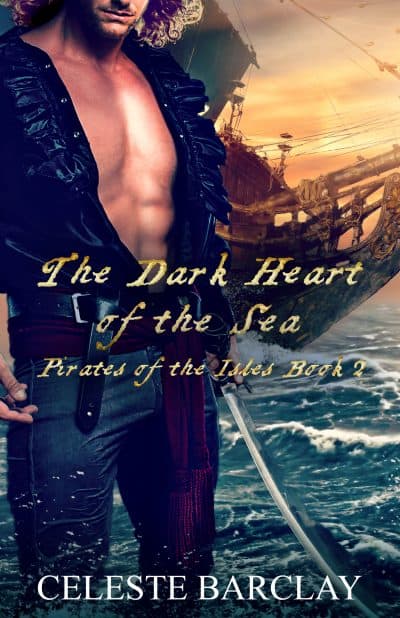 The Dark Heart of the Sea: A Steamy Fated Lovers Pirate Romance (Pirate of the Isles Book 2)

What happens when a ruthless pirate meets a woman who warms his dark heart? What happens when a widow trusts a notorious pirate known for a heart as merciless as his deeds? Will she submit to his dominant nature when his form of discipline is anything but expected?

What happens when a ruthless pirate meets the woman who warms his dark heart?
Ruairí MacNeil is one of the most feared pirates sailing the British Isles, but when he rescues a woman from attack, not once but twice, he discovers he can’t resist her when she matches wits without fear. Tempted by a future he never considered before, Ruairí makes an impetuous offer to the widow he discovers working in a tavern. Can Ruairí offer this mystery woman a better life aboard his ship than she has on the tiny island of Canna? Can he protect her from outside danger while he surrenders his heart?

What happens when a widow puts her trust in a notorious pirate known for a heart as merciless as his deeds?
Senga MacLeod Sorley didn’t expect a chance encounter with a pirate to lead to a kiss and an adventure on the high seas. A widow with little to her name, Senga provides for herself by working in a local tavern, but she refuses to earn her living by doing anything other than serving food and ale. When men from the village demand more than she’s willing to give, she discovers the menacing pirate has a protective side he only reveals to her. Will Senga seize a chance at love after one kiss with a brooding pirate? Will she submit to his dominant nature when his form of discipline is anything but expected?

A new life aboard a pirate ship brings Senga an independence she never imagined, but along with that comes danger that puts her life and Ruairí’s at risk. When foreign enemies threaten their burgeoning love, Senga must choose between life as a pirate queen or life as a lonely but safe widow. Ruairí refuses to give up on happiness he never thought possible after running away from home. He must fight to show Senga her past doesn’t have to determine her future when she fears history repeating itself. Can the Dark Heart convince the one woman who brightens his life to stay? Can Senga trust herself enough to accept the love Ruairí offers?

Pirates of the Isles is a STEAMY series where lust and love become tangled when pirates and their ladies toe the line between pain and pleasure. Travel to the Hebrides and the coast of Scotland as these pirates pillage and plunder not only villages and ships but the women fearless enough to take them on. Each book can be read as a standalone, but many characters appear throughout the series.
This passionate love story is ready to go up in flames. It contains scenes with spanking, light bondage, and anal play. If this content offends you, please do not download.