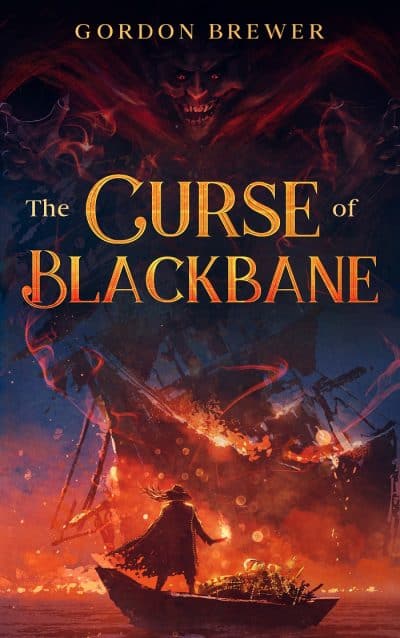 Cursed by an archangel and on the run from demons, the infamous pirate called Blackbane searches for an escape in this new, dark historical fantasy from Gordon Brewer.

In this tale set during the late 18th century, Blackbane, a rogue buccaneer captain from the Americas, carries an overwhelming lust for gold and violence. Working for the Ottomans and plying the waters of the Mediterranean, his ship spreads fear along the Spanish and Portuguese coasts.

During a bloody attack on a convent, Blackbane discovers a golden cross and dies at the hands of the archangel Remiel. In a cruel twist, the angel returns the pirate back to the living while carrying a terrible curse. Given immortality to his body while his mind is tortured with the everlasting suffering of those he’s killed, Blackbane remains unworthy of death or heaven.

Worse, the Seven Princes of Hell search for him as well. The demons intend to rip his immorality and soul from his body for their use. In his attempt to escape his horrible fate, the pirate flees to new waters. Captured in France, the captain meets a strange, bloodthirsty preacher called the Black Monk.

Unable to escape his vicious past, the pirate receives a vision, which may put an end to his curse. With the help of his new comrade, the pirate believes he might escape his suffering by recovering the lost relics of saints. However, the man doesn’t realize that angels and demons carry their own agendas. Like Dante’s journey through Hell, the man called Blackbane finds his new destiny remains woven in terror, violence, and blood.