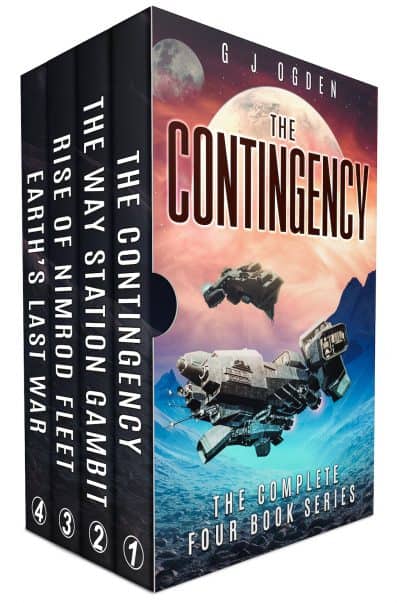 An alien invasion space opera with a twist that you won’t see coming. Read the complete Contingency War series now as a four-book box set. Amazon #1 best-seller in Space Fleet Science Fiction with over 240 5-star ratings.

No-one comes in peace. Every being in the galaxy wants something, and is willing to take it by force.

The Hedalt were no different. They came from the distant reaches of the galaxy to wage war. Their fleet wanted to take Earth for its prize, but we were ready. We were stronger.

For years, we fought them, ship-to-ship, until we scattered their forces and drove them back. Pursuing the Hedalt fleet to their home world, we delivered the decisive blow. We nuked their planet and wiped them out for good.

Or so we thought.

For decades, Earth Fleet sent out Deep Space Recon missions to scour the galaxy and clean up the remnants of the Hedalt Empire. Eventually, we found only ghosts—empty outposts and long-dead colonies.

But, close to the edge of known space, I—Captain Taylor Ray—and my crew are about to make a discovery that will change everything.

The war isn’t over. The war has yet to begin.