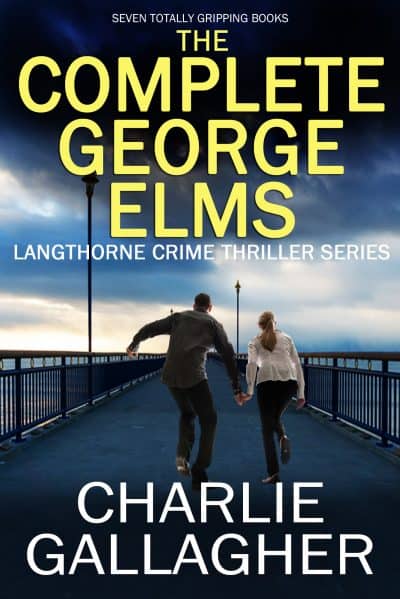 Seven of the most addictive crime thrillers you will ever read, all massive best-sellers, all in one great value box set. The complete series features maverick Detective George Elms who’s tracking down some of the most vicious killers you’ve ever read about.

Seven of the most addictive crime thrillers you will ever read~

Don’t miss this great value box set featuring maverick detective George Elms tracking down some of the most vicious killers you’ve ever read about.

You get seven heart-pounding thrillers in this box set. This is the complete series.

Bodily Harm
An edge-of-your-seat crime thriller starts with a vicious stabbing of a pretty teenage girl and her boyfriend on a local bus. She happens to be the mayor’s niece. It’s the final straw for the local community. The police are desperate to get results and decide on a risky course of action involving undercover infiltration of the notorious Effingell Estate.

Panic Button
“A man is stood in front of me with a gun. He has a message for me and for us all. He says that he will come for us. He will come for all of us one by one. Until it is finished.”

Someone is killing the officers of the Langthorne Police one by one. And in a sadistic twist he makes each victim push their radio panic button before they die, thus broadcasting their last moments to the entire force.

Tony Robson faces this choice when he’s told he needs £3000 per month to carry on the life-saving experimental treatment for his son’s rare disease.

End Game
There’s a cop killer on the loose and only George Elms can take him down.

Detective George Elms is out of prison, and the police force that put him there is in chaos. Now they want him back to lead the hunt for vicious cop killer Kane Forley. Only George can put together a team that will bring this criminal to justice. But perhaps his superiors are using George as bait, and they have their own very dark secrets to hide.

Missing
What wouldn’t you do to get your family back?

In the busy town centre of Canterbury, a woman and a young boy are snatched from the street.

A few miles away, a man stands on the edge of a viaduct ready to throw himself off. Sergeant Shaun Carter, a police negotiator, is trying to talk him down, but he dare not get too close. This man is the only person who has the answers needed to find the missing.

Then She Ran
On a lazy Sunday morning, Jenny Harris is shaken awake by her panic-stricken boyfriend, Joseph. Their baby daughter lies asleep on her chest. “We’ve got to go!” Joseph screams.

In their hotel room, Jenny hurriedly wraps her tiny baby up. All their belongings are left behind. There’s no time. Joseph’s panic is contagious.

Jenny sprints with her family from the hotel. And it’s clear that they are being chased. Their pursuers are indiscriminate and they are deadly. Her boyfriend falls, caught up in the carnage, but he manages to give her one last message: RUN!’

Her Last Breath
Detective George Elms thought he’d seen it all, until he comes up against serial killer Henry “The Bull” Roberts. Henry Roberts had a type—young, blonde, attractive women. He is three years into a life sentence.

Two of his victims were never found.

Now, Henry Roberts is dying and he wants to make a deal. Move him to a secure unit by the sea and he will tell the police where the other victims’ remains are.

If you like Angela Marsons, Rachel Abbott, Ian Rankin or Mark Billingham you will be gripped by this exciting new crime fiction writer.

Hours of great reading with brilliant twists and turns~

What readers are saying about Charlie Gallagher’s books

“Charlie Gallagher is a police detective which means police procedures are spot on. His cast of characters are believable.” —Elizabeth Burns

“It’s one of the most exciting, fast-paced crime novels that I’ve read” —GreatStuff

“Probably the best police procedural books I have read, and I have read a lot.” —W. Collins