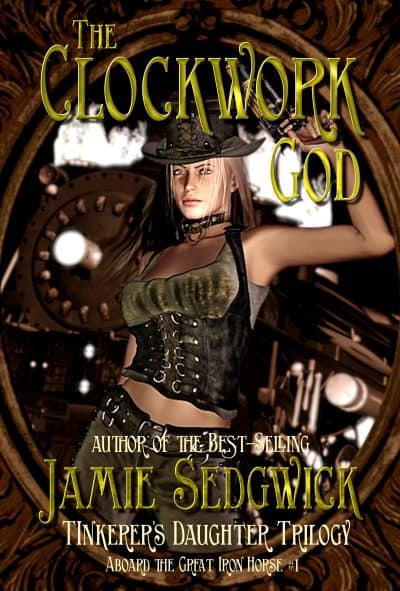 The Clockwork God (Aboard the Great Iron Horse Book 1)

“Aboard the Great Iron Horse” is a fast-paced serial adventure that picks up where Sedgwick’s bestselling fantasy/steampunk series “The Tinkerer’s Daughter” left off.

Barreling through their post-apocalyptic world in a massive steam locomotive, River and her companions -the steam-powered ape named Socrates and his crew of warriors, miscreants, and genetic anomalies—travel from one unpredictable adventure to another.

On their first outing, the crew encounters a bizarre cult of isolationists and their strange “Clockwork God.” Meanwhile, several crew members have gone missing, and tensions are rising as mutineers conspire to overthrow Socrates and destroy the train. As the conflict comes to a boil, a power more ancient and sinister than anything they ever imagined threatens to destroy them all.

Five Stars: “I read this book in one sitting, as I was physically unable to put it down . . . I highly recommend The Clockwork God, and cannot wait to see what else Jamie Sedgewick has in store for us.” –Goodreads Review

Four Stars: “An action packed, thrilling read; Very much a must for sci-fi and steampunk fans!” –Goodreads Review

Five Stars: “Can’t get enough of the stories by Jamie Sedgwick. This has been the best yet.” –Amazon Review