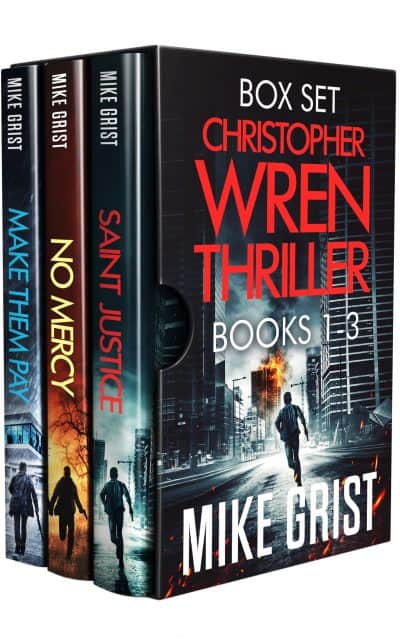 A biker gang attacks black ops legend Chris Wren, leaving him for dead and stealing his truck. Now he’s going to get it back. Get the first three explosive thrillers in the bestselling Christopher Wren series now: Saint Justice, No Mercy, Make Them Pay.

They stole his truck. Big mistake.

Chris Wren is a black-ops legend, the CIA’s perfect angel of justice—until personal tragedy strikes and he flees into the wilderness of Utah.

Saint Justice
When Wren pulls over on a Utah highway after three weeks on the road, a biker gang attacks him, leaves him for dead and steals his truck.

Now he’s going to get it back.

From a secret warehouse in the desert. Ringed with fences. Filled with human cages.

As the body count mounts and a shocking national conspiracy unravels, one thing is for certain.

Justice will be done.

No Mercy
Chris Wren has hunted the Blue Fairy for months—a hacker group stalking innocents on the dark Internet. Including his kids.

Now an anti-Blue Fairy activist is dead in Detroit, two more have been abducted, and Wren alone knows what it means.

The monsters are crawling out into the light.

As a Blue Fairy army rises and a mass hacking attack threatens to cripple the USA, only Wren and his brilliant lieutenant Sally Rogers stand ready to enforce true justice:

No mercy for the wicked.

Make Them Pay
In the snowy wastes of Alaska, black-ops legend Chris Wren discovers a viral video like no other.

A billionaire banker is murdered live before an audience of billions—and Wren alone knows what it means.

Chaos is coming to America.

As viral hatred for the rich explodes into violence against all, Wren and his genius lieutenant Sally Rogers battle for control of the streets, enforcing an iron, blind justice:

All must pay for their crimes.

The Chris Wren thrillers are packed with rollercoaster twists that will leave you hungry for just one more page.

“Every bit as good as Reacher, Bourne and Rapp—I’ve read the whole series twice!”

“Addictive, intelligent, edge-of-your seat writing—as urgent and gripping as it gets!”