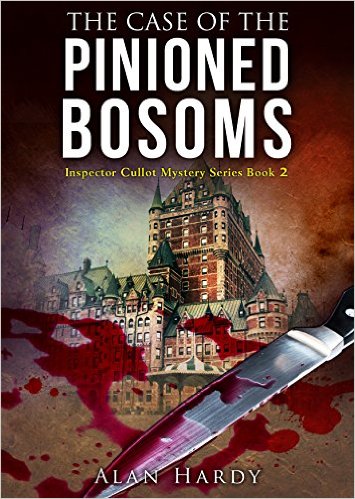 The Case Of The Pinioned Bosoms (Inspector Cullot Mystery Book 2)

Inspector Cullot had only been at his hotel in the Swiss Alps for two days when he knew there would be two murders. Which resident is guilty of these gruesome murders? What secrets does the hotel hold? Can Cullot stop there being a third or even fourth murder?

After staying in the Swiss Alps for barely two days, Inspector Cullot knows there are going to be two murders committed at his hotel. He also knows there is only one man who can prevent there being even more . . . That man is Inspector Cullot himself. So begins another Inspector Cullot Mystery . . . Cullot, together with his gorgeous, sexy daughter, Stephanie, his faithful side-kick, Detective Sergeant Watkins, and the bumbling, note-taking PC Blunt, put their holiday on hold and set off in pursuit of the killer, in one of the most baffling cases of Cullot’s illustrious career. Who are the two naked victims pinioned to their beds by knives thrust through their bosoms? Who’s the callous killer who’s carried out such hideous, gruesome murders?

We meet an array of characters: the still stunningly attractive Madame Laporte (whose charms have an immediate effect upon Cullot himself); the suave, ripplingly-muscled Herr Randimann (whose charms Stephanie is currently sampling); the brazen little minx, Veronique, Madame Laporte’s daughter; the Italian ice-cream salesman, Signor Delitto, with a constantly twinkling eye for the ladies; the secretive Herr Geschlecht, and his sour-faced wife; and other characters, with their unexpected entrances and exits. Which one of them is hiding his (or her) real identity? Who harbors dark secrets from the past, and a burning, uncontrollable desire for revenge? What nefarious deeds have been taking place over recent years at this seemingly respectable hotel? What are the links between the victims and the guests which Cullot and his squad must unearth? Are there even unsavoury connections between the victims and members of Cullot’s team itself? Who is involved, and who isn’t? Will you be able to spot the killer? Amidst the sparkling repartee, non-stop thrills and series of startling revelations, will you be able to discard the red herrings and fasten on to the important clues? Will you be completely baffled, like the mentally-challenged PC Blunt, or exhibit the incisive skills and investigative acumen of Cullot himself, maybe the greatest detective the world has ever known? There’s only one way to find out . . .