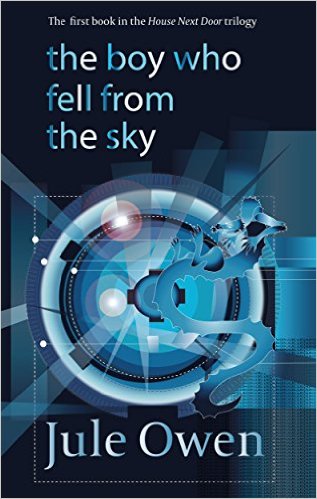 With the city of London locked down, Mathew Erlang is confined to his house. Desperate for a distraction, he begins to investigate his peculiar neighbor, only to open a door and fall four hundred years into the future. But his actions may just destabilize human history.

(2) Moderate
Click or tap each bar for details
Log in to submit or change your own rating.

Introducing Mathew Erlang, creator of holographic dragons, who is about to get tangled up in the future in a rather serious way.

The world is falling apart in 2055. Floods have devastated London, on the eve of the First Space War. With the city locked down, sixteen-year-old Mathew Erlang is confined to his house with only his cat, his robot, and his holographic dragons for company.

Desperate for a distraction from the chaos around him, Mathew becomes fascinated by his peculiar and reclusive neighbor, August Lestrange, and begins to investigate, turning to the virtual world of the Nexus and Blackweb for answers. But as he digs deeper, Mathew realizes that Mr. Lestrange isn’t a normal man at all.

When Mathew accidentally finds himself trapped in Lestrange’s house, he opens a door and falls four hundred years into the future. Unwittingly, he starts to destabilize the course of human history.