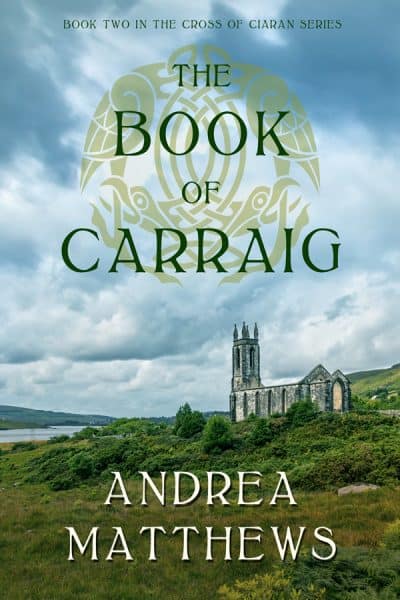 The Book of Carraig (The Cross of Ciarán Book 2)

Can fifth century Celt Ciaran Donnelly hide his identity and navigate twentieth century Ireland without destroying his relationship with archaeologist Caitlin O’Connell, or will the appearance of a serial killer from his own time force him to reveal his secrets?

Almost a year after waking to find himself in twentieth-century New York, fifth-century Celt Ciarán Donnelly has finally returned to his childhood home, but Ireland is nothing like he remembers it. The realization is overwhelming and taking a toll on his relationship with archaeologist Caitlin O’Connell as well. Keeping his secret from her has been no easy task.

Due to some quick thinking on the part of her Uncle Mike, however, Ciarán has managed to conceal the fact that he and the Celt that mysteriously disappeared from a local museum the previous year are one in the same.

Ciarán intends on keeping it that way, at least for the time being. Right now, there is another more pressing issue. He longs to locate the grave of his fifth-century wife. Her only crime was daring to love him, a guardian of the goddess, and for that he can never forgive himself. Even more urgent, he needs to figure out a way to wake his brother, Aodhán, and free him from the Dublin museum, where he continues to exist in the same centuries’ long sleep Ciarán had. At least, Ciarán hopes he does.

Of course, things never go according to plan. When a serial killer starts stalking the countryside, Ciarán may be the only one who can stop him. To do so, however, he’ll need to risk his own life, as well as that of his brother, thus revealing his secret and exposing the truth. But can he even defeat such a ruthless monster? Only the Book of Carraig holds the answer, but first, Ciarán needs to find it.