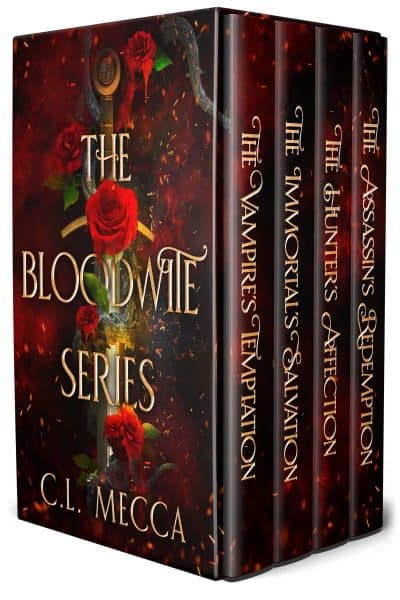 Kenton Morley and Lawrence Derrickson have hated each other ever since they were feuding border lords in medieval England and Scotland . . . seven hundred years ago. Get all four novels in the completed Bloodwite series today!.

Even cursed blood can fall prey to love’s bite.

Kenton Morley and Lawrence Derrickson have hated each other ever since they were feuding border lords in medieval England and Scotland . . . seven hundred years ago. When their bloodlines were cursed, birthing the world’s first vampires.

Their feud has since carried through the centuries as the Morley brothers seek to destroy the Cheld—the only line of humans capable of killing their kind—while the Derricksons seek to save them.

When the vampires move to Stone Haven, Pennsylvania, Alessandra Fiore and her friends will be caught in the middle of an ancient feud that threatens to shatter the peace in their sleepy, tight-knit town.

The Vampire’s Temptation
Kenton seeks to kill her. Lawrence tried to save her. What’s a girl to do? Especially when one of them has a devilish twinkle in his eyes that she just can’t say no to. And when the decision could cost Alessandra her life.

The Immortal’s Salvation
Lawrence feels he’s finally found a home, and the love of his long life, in Alessandra’s best friend Toni, but trouble soon finds him in Stone Haven, forcing him to decide what matters most—desire or duty. Family or his own heart.

The Hunter’s Affection
The English teacher is everything Torr Derrickson is not. A small-town girl. A rule-follower. And very much a human. She’s the last woman Torr wants in his life . . . yet the first one to ever set his blood on fire. Forced together, the two opposites must decide between passion and reputation.

The Assassin’s Redemption
Of all the original vampires, only one is the deadliest, the most ruthless, and persona non grata when he arrives in Stone Haven . . . because he once tried to kill his sister-in-law. The woman was Cheld, after all, and Rowan has been protecting his brothers from the vampire hunters for over seven hundred years. He won’t stop now, even when the lovely “little witch,” and Alessandra’s old friend, brings him to his knees. Instead, Rowan will do what he’s done for centuries. Get up, brush off the dust, and kill anyone who gets in his way.