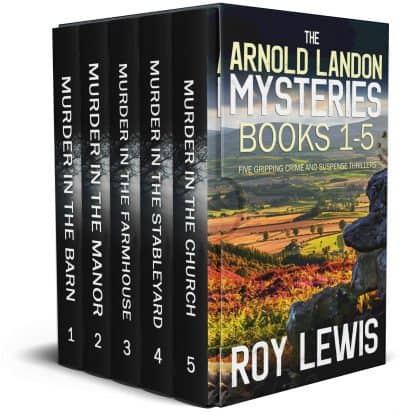 Are you seeking an enticing new mystery series, filled with first-rate characters and breathtaking twists and turns? Try this series that has over 2,700 positive reviews on the individual books!

In this five-book box set:

Murder in the Barn
Rampton Farm, Northumberland, is earmarked for demolition to make way for an amusement park. But Arnold Landon makes a thrilling discovery: the Old Wheat Barn. Then and there, he realizes he must save it from the developers. Then the barn offers up its most shocking secret yet. A dead body, sprawled in the straw. What other crimes lay hidden in the dark history of the barn? Arnold won’t rest until he uncovers the truth.

Murder in the Manor
Arnold Landon is drawn to Oldham Manor, an atmospheric medieval house in the middle of nowhere. When he is invited to catalogue the library there, he jumps at the chance. Late one night, he stumbles on a secret passage. Where will it take him? And why was it walled up? When a stranger turns up dead in a ditch, Landon realizes that someone is watching his every move. And they have a plan to ensure the past stays buried for good. What did the victim know that was worth killing for?

Murder in the Farmhouse
Penbrook Farm might seem like a ramshackle hovel, buried deep in the woods of Northumberland. But to fragile old Sarah Ellis, it’s home. And the developers can have the place over her dead body. Of course, no one ever expected it to come to that . . . Least of all Arnold Landon. Late one night, he calls at the farmhouse to find the place in darkness. By the fire’s dying embers, he can make out a body, lying on the hard stone flags. Who wanted the farm so badly they were ready to kill for it?

Murder in the Stableyard
A professor comes calling on Arnold Landon for research assistance. But he’s overlooked an important fact. Landon already has a job at the council—along with a raft of superiors who’d rather he focused on the dispute at hand. Namely, who is the rightful owner of the Kilgour Estates? And the opulent manor house in the grounds? Dashing rake Patrick Yates insists it’s all his. But a black sheep in the family returns to claim otherwise. Who is telling the truth?

While Landon’s still grappling with the complexities of the case, Yates turns up dead—an ancient arrow planted firmly in his chest. And Landon realizes his search for answers is leading him down a dangerous path indeed.

Murder in the Church
St Michael’s Church may be derelict, but it’s not deserted. Someone still comes here to worship on nights when the moon is full. Arnold Landon should know. He’s seen the grisly evidence for himself. Blood among the roses. The butchered remains of a man, tangled in the undergrowth. The victim was a traveller. How did he come to be in the churchyard? Arnold has a theory that leads back centuries, all the way to the cult of the Raging Wolf. Can he unmask the modern-day killer before anyone else pays the price?