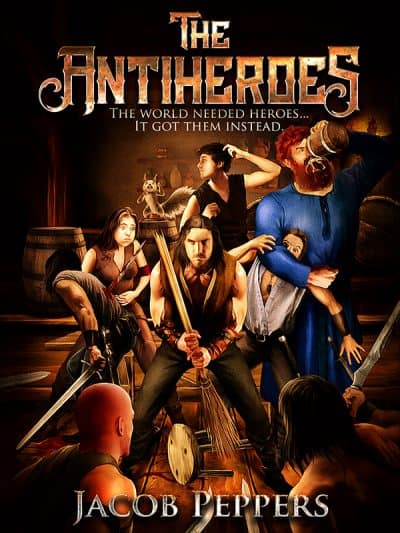 When all the world’s heroes are busy—being dead, mostly—it is left to Dannen Ateran and his companions to stand against a necromancer and his undead army. They are not heroes. But, perhaps, they just might do.

The world needed heroes . . . It got them instead.

A swordsman past his prime who has vowed to never wield a blade again.

A mage who’d rather throw fists than fireballs and thinks magic is for sissies.

An assassin who grows sick at the sight of blood.

And a man with a pet squirrel he believes to be an ancient god from long ago.

An evil has risen in the land, one that, if not dealt with, threatens to start a war which would include the gods themselves. To counter it, the realm must call on its greatest heroes, its most courageous adventurers. Unfortunately, those great heroes, those brave adventurers, are all busy—being dead mostly.

So it is left to Dannen Ateran, known in his youth as the Bloody Butcher but, more recently as the passed-out drunk at the table in the corner, to lead his companions against an army of the dead.

They are not heroes.

The Antiheroes is the first book in a new epic fantasy series by bestselling author Jacob Peppers. It is a tale of fast-paced action, sword fights, magic, and humor. Think you can’t laugh at undead armies and battles of life and death? Come find out.