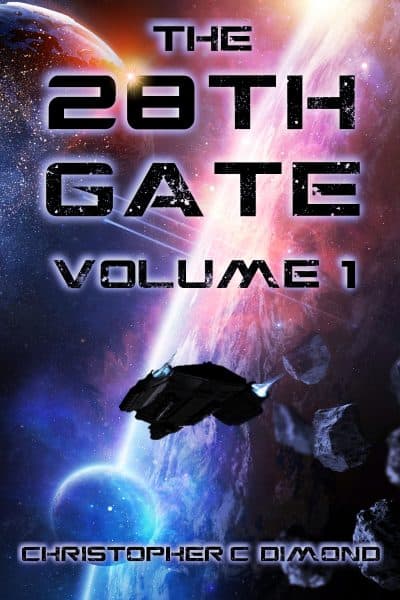 With a stolen experimental starship and a pair of advanced synthetic limbs, he’s not your average bounty hunter.

With a stolen experimental starship and a pair of advanced synthetic limbs, he’s not your average bounty hunter.

When he accepted the job on a backwater planet, Hunter thought it would be easy. He and his partner just had to track down a missing researcher. But when they find her, she’s fled a quarter of the way around the massive ring of twenty-seven gates and Hunter realizes all is not as he was told.

That simple realization, and Hunter’s drive for retribution, kick off a series of adventures leading to the most important discovery since the fall of the Gate Age—and put him in direct confrontation with the corp he’s been running from for the past 10 revolutions.

Set in a far distant future, The 28th Gate is a series of tales that will appeal of fans of space marines, space fleets, and military hard science fiction. The series consists of eight volumes spread across four seasons telling the story of Hunter’s struggles against the AAA corporation that created him. Each volume contains six episodic novelettes each with the action, character, and plotting of a complete story all crammed into an espresso-like package, while each season chronicles a different arc in the overall epic.

Join the adventure now in The 28th Gate: Volume 1!