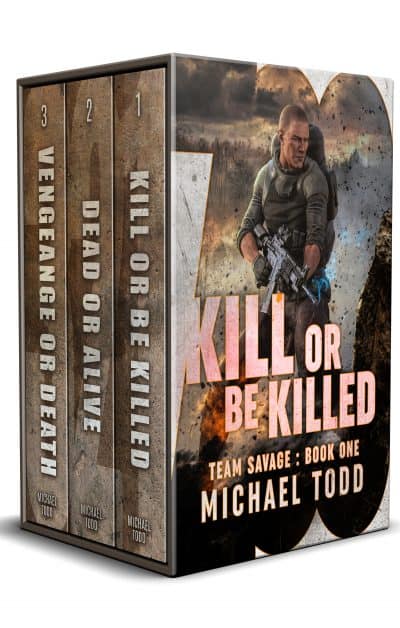 “What do you know about the ZOO?” Born from the fertile imagination of bestselling author Michael Anderle. Get the complete Team Savage Series, all three books, as a boxset today!

Born from the fertile imagination of bestselling author Michael Anderle.

Get the complete Team Savage Series, all three books, as a boxset today!

Kill Or Be Killed

The former sergeant took in a deep breath, tilting his head as he looked at the man in front of him.

“Unofficially? It’s a military experiment gone bad, with all the pros and cons that come with it. No official word was shared, of course. This means that I don’t officially know the source of the damn jungle starting to cover the Sahara Desert nicknamed the Zoo comes from some goop that was found on a missile that may or may not have alien origins.”

He stopped his explanation a moment and eyed the Retired Colonel in front of him, “Remind me, what is the government’s official stance on aliens again?”

Anderson smirked, “The jury is still out on that one.”

One might think that getting someone away from one of the most dangerous jungles in the world would be an easy task. But not if that person was Dr. Courtney Monroe.

Jeremiah Johnson needed a job, and Retired Marine Colonel Anderson needed a man with Johnson’s particular skills, and a team built to get the job done.

That question started a black-ops operative down a different path.

“Do you know who I am?” Jenkins blurted without thinking. “Do you really think you can get away with killing a sitting member of the United States’ House of Representatives?”

“You put my family in the crosshairs of barbarians who wouldn’t think twice about using them as leverage to get to me,” the man stated calmly, and not a single hint of emotion crossed his face.

“You have a family, Congressman, one you appear to love a great deal. What exactly would you do to keep them safe?”

Was this a match made in Heaven, or Hell?

The answer depends on which side of Savage’s gun your people happened to stand.

The safe end, or the business end.

Inside the ZOO isn’t the only place people where people act greedy. Doctor Courtney Monroe has taken control of her Dad’s legacy—she merely needed two men to help make it happen.

Will Anderson and Savage stay up to the task?

A knock-down, drag-out story where the last man standing is the one who rights the wrongs. Or at least the one who writes the story in the history books.