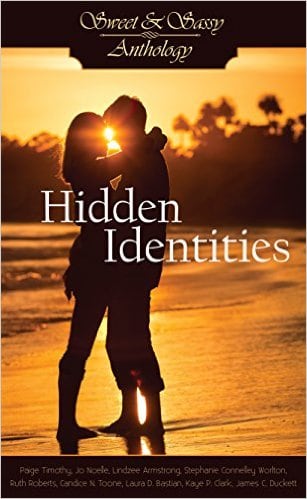 Readers will be delighted with nine sweet, contemporary romance novelettes in Sweet & Sassy: Hidden Identities. In this charming anthology, you will fall in love again and again.

(1) Mild
(2) Mild+
Click or tap each bar for details
Log in to submit or change your own rating.

This box set is no longer available for purchase.

The Best of Me by Paige Timothy
Becky is a cancer survivor who has been blogging about her journey. She’s shocked to find that Josh, her one-time love and now-famous oncologist, is the main speaker at the symposium she’s been asked to attend. Has fate given them a second chance at a future together, or just a shot at miserably ever after?

Second-hand Hearts by Jo Noelle
When Elena sees Chase for the first time, his turquoise eyes and tousled blond hair convince her that she might believe in insta-love. Just in time, her brain takes over, reminding her that her business is in trouble, making the future uncertain—not a good time for love. But being with Chase is as easy as following her heart, until she finds he has a secret big enough to break it.

First Love, Second Choice by Lindzee Armstrong
When wedding planner Keslee gets asked on a date by her long-lost high school crush, Bryce, everything should be perfect. But Bryce mistakes Keslee for her deceased twin sister, Jadyn. And she doesn’t correct him. Now they’re unexpectedly working together. Keslee knows the charade can’t last much longer, and fears she’ll lose Bryce forever when she tells him the truth.

Hacked by Stephanie Connelley Worlton
NSA data analyst Samantha Perry never knew being an introverted computer geek could get dangerous until she digs a little too deep into a greedy blackhat’s business, forcing her to change her identity and relocate. She risks everything to try to close the case, but may end up putting a nail in her own casket. And if she doesn’t, Seth, her hot new neighbor, just might.

To Love and Protect by Ruth Roberts
First Son Daxon Hayward has refused a secret service detail since the day his father was elected President. This time the threat against Daxon is very real, and his father plants an undercover agent to protect him, Lorelei Davis who is capable and beautiful. She’s received her assignment: Protect the First Son, don’t let him know she is an agent, and don’t fall in love.

Closing Time by Candice N. Toone
Chef Will Morrison can’t help himself after watching Kelsey sit alone at a table waiting for a blind date. When he steps in to save her from being stood up, he expects to exchange dull first-date pleasantries, but finds himself drawn in by her quick wit and spunk. Will hears himself confirming plans for a second date only to realize that she still believes he’s someone else.

Sink or Swim by Laura D. Bastian
Shelly can’t believe she’s fallen for another cheater. The last few weeks at the gym swimming next to Brandon had almost convinced her she could date again. Brandon’s excited to be back home with a career that can finally hold a candle to his twin brother’s success. When Shelly suddenly turns cold, Brandon can’t help wondering if it has something to do with his brother.

Write and Wrong by Kaye P. Clark
Jon Patterson is burned out. After publishing a series of blockbuster novels under his pen name, he’s hit a brick wall. He escapes to a rural town in Idaho where he meets Abby, the local librarian. She ignites his imagination and quickens his heart. Without the pressure of his pen name, Jon is free to be himself. But will he lose Abby when she learns his secret?

Undercover Lover by James C. Duckett
Agent Johnny Anderson is struggling with an investigation that could make or break his career. However, it’s love at first sight when beautiful and witty Hannah moves into the neighborhood. Will Johnny lose Hannah when she finds out his cover story is a façade? As things get hotter between them, his love for her might endanger her life.