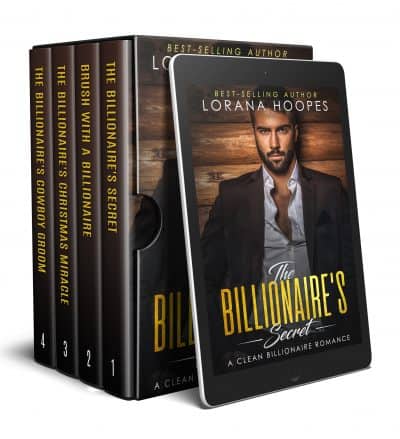 Four full-length novels that will warm your heart and renew your faith in God. Over 300 reviews on the individual books!

Four full-length novels and over 900 pages of strong bachelor Billionaires who will touch your heart and renew your faith in God!

The Billionaire’s Secret
From bad boy to baby daddy?

Billionaire Maxwell Banks enjoyed his single life. Until a blast from his past shows up on his doorstep with a daughter he didn’t know he had. Now he is forced to become a father overnight and he has no idea what he’s doing. Can he change to become the role model she needs?

Alyssa Miller is the kind of person who helps out when she’s asked. And right now, Peyton needs her. Maxwell has no idea how to be a dad and Alyssa is practically Peyton’s Godmother. So she’ll work a little magic and help the two of them figure it out. Until she starts to fall for Maxwell . . .

The only way to find out if it’s more than a crush is to get past their own limits and open their hearts to one another. But can they do that, when Peyton’s happiness is on the line?

A Brush with a Billionaire
Can a movie star really find happiness in a small town?

Billionaire actor Brent McKasson is tired of being typecast in the same action roles. Wanting something different, he decides to take some time off to think. However, when his car breaks down in the small town of Soda Spurs, Texas, he is forced to rely on people he doesn’t know, Brent rediscovers the charm of a small town and a feisty female mechanic, but will it be enough for him to stay, or will the fame call him back?

Sam Jenkins moved to Soda Spurs after a hard breakup. All she wanted to do was open up an auto shop and return to her small town roots. Then Brent McKasson lands in her lap. Literally. She’s the only mechanic in town, and with the only hotel in town booked for the Cowboy festival, she is forced not only to fix his car but also open her spare room to him for the weekend. What she hadn’t expected was to open her heart to him as well.

Can a spark between two opposites create a lasting love? Or will his fame and her independence keep them apart?

Drew Devonshire is tired of attending wealthy functions with women who only want his money. He’s pleasantly surprised, however, when he meets a woman at a masquerade ball who seems genuine and down to earth. The only problem is, she runs off before he finds out who she is. She leaves behind a bracelet and a first name. Will it be enough for him to find her?

Gwen Rodgers isn’t wealthy and she doesn’t like strangers, but when her friend Carrie asks her to attend a masquerade ball in her place, she reluctantly agrees. There she meets a handsome man who piques her interest, but when she finds out that man is billionaire Drew Devonshire, she knows a relationship could never work. However, when Drew comes looking for her, she is forced to decide whether she should tell him the truth and risk losing him or continue the charade.

Will these two find love and their Christmas miracle? Or will it end in a New Year’s disaster?

Designer Carrie Bliss has it all. Her business is insanely successful and she’s dating a man she could see herself marrying. But when he actually proposes, she’s forced to confront a secret from six years ago that could change everything.

Cowboy Cal Roper is picky. Even though he’s ready to settle down, he avoids dating any of the women in town. He’s already got a girl, whether she knows it or not. When Carrie returns to town, he’ll do anything to convince her they belong together.