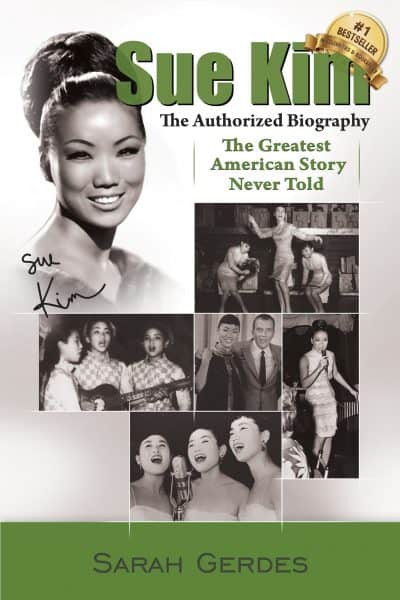 The story of Sue Kim, lead singer of The Kim Sisters, has captivated music lovers, history buffs, and fellow entertainment legends alike. From singing on the streets to reigning the stages of Las Vegas, hers is truly the greatest American story never told.

It is a story of a child growing up surrounded by immense privilege, losing it all to war, singing on the streets to keep her family alive, being discovered, and coming to America at the beginning of the glamorous sixties. Ignorant of racial barriers, Sue led the singing trio, The Kim Sisters, to mainstages across the US, a first for an Asian performer. Then they broke the television barrier, appearing on every major network, and the Ed Sullivan show, a total of 22 times, a network record. After that came radio, movies, throwing out the first baseball at the MBL game, and attending the premier opening of the very first Playboy Club.

Beautiful and talented, the musical prodigies played more than 20 instruments each and sang in multiple languages. Sue was courted by Elvis and Sinatra, but saved her love for a boy from New York, who she married. He went on to become the longest running casino boss in US history.

Behind the glamour were addictions, loss, and abuse, but Sue overcame all the odds, ultimately becoming the only Asian inducted into the Las Vegas Hall of Fame. Today, she and her husband live in Las Vegas and are considered entertainment royalty.