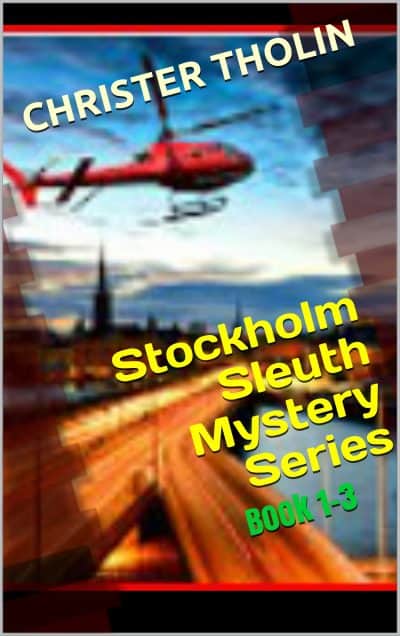 Read the first three books of the series around the private detectives Lars and Elin in one volume.

Vanished?
She: a very hot 30 something Swedish woman. He: a native of Berlin, on vacation in rural Sweden, seeking solace for his broken heart. They meet. He finds her irresistible. But before their relationship can get off the ground, she vanishes mysteriously, having apparently been abducted. So Martin sets out to rescue Liv from her captors, with the aid of two Swedish detectives in a race against time – and across Sweden. In so doing, Martin and his intrepid detective duo put their very lives on the line.

Secrets?
Fledgling private investigator Elin Bohlander takes on what looks like an easy assignment—at first: to determine if her client’s boyfriend is having an affair with another woman. To do this, Elin follows him to a secluded cabin in the woods, where she soon discovers that what’s actually transpiring is stranger than anyone thought. Having ventured too far, she’s stumbled upon a hornet’s nest and put her life at risk. But it’s too late. Can Elin win the unequal fight against a gang of brutal child molesters?

Murder?
Christina’s idyllic existence with her husband Patrik comes to an abrupt end when Patrik suddenly vanishes from their suburban home in Stockholm. Christina is precipitated into a hellishly desperate and anguished search for Patrik, which after six weeks turns up nary a trace of him.

At her wits end, she contacts local sleuths Lars and Elin, who, after a brief investigation, reach the conclusion that Patrik simply decided to abandon his cushy existence to embark on a new life—without Christina.

Lars and Elin ultimately trace Patrik’s movements to the wooded wilds of northern Sweden, but too late—he’s found dead. The police rule his death an accident, but Christina thinks otherwise, and so she asks Lars and Elin to do a thorough investigation of the circumstances surrounding Patrik’s demise. Was his death really accidental, or was foul play involved? And was the mysterious Natalia somehow implicated?

Unfortunately, none of the countless leads that Lars and Elin follow up gets them any closer to solving the mystery of Patrik’s death. But then they get a startling break that results in Christina having to make a tricky and extremely consequential decision that plunges our three protagonists into a life or death struggle.

If you like fast-paced action and surprising twists and turns, then you will love Christer Tholin’s sleuth series.