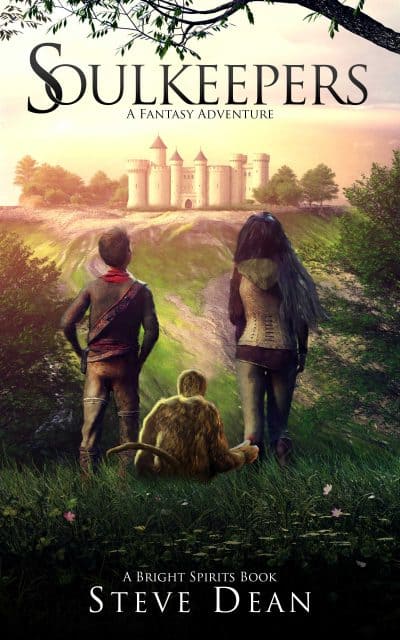 Garen is unaware of the future the mysterious Brotherhood have laid out for him. Sciel is an ape-like creature who’s loyal to his friend and always hungry. Kymar, hidden from the Brotherhood, she is now an orphan. Someone is going to pay for her loss.

The Island of Huclan appears to be a paradise. There’s no crime, hunger, or poverty, everyone has work and all are treated equally. The Brotherhood maintains this utopia by performing a magical rite to remove and capture a part of every newborn baby’s soul. This makes the people placid, compliant and incapable of dissent or violence. Sometimes, the ritual goes wrong, turning the recipient into a mindless shell. Rarely, it doesn’t work at all, leaving the child free to live as they choose.

Garen is one such child, living a carefree life with his three-toed, monkey-like friend Sciel, one of a race of intelligent primates. Garen lives with his father in a small village, acting like the other inhabitants when the soldiers make their regular patrols.

Kymar lives with her mother deep in the forest, surviving as best they can in caves and burrows, only their constant vigilance keeping them safe from the Brotherhood. When Kymar’s mother dies in a trap set by the soldiers, she vows to destroy the Brotherhood by any means possible.
Fate brings the trio together, and they set off for the Brotherhood’s stronghold to break the Soul Jars and free the captured souls.