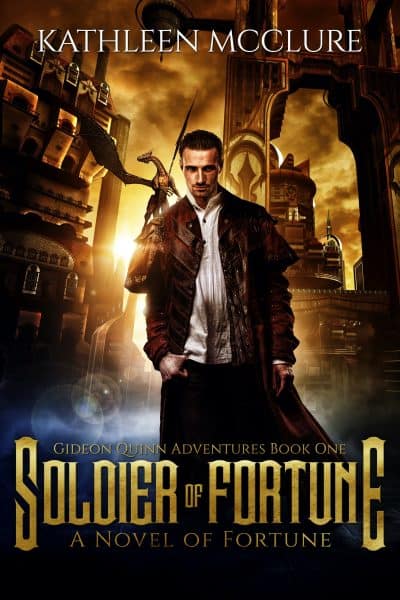 Ex-con Gideon Quinn is seeking revenge. What he finds is a streetwise dodger, a city in turmoil, and a calculating enemy determined to stop Gideon from discovering their deadly purpose—by any means necessary. “A Mix of Call of Duty, Oliver Twist, and Jackie Chan!”

In the distant future, on the planet Fortune, tech is low, treason high, and heroes unlikely.

Wrongly convicted of treason, Infantry Colonel Gideon Quinn has spent six years under the killing suns of the Morton Barrens, harvesting crystal and dreaming of vengeance.

But when a general of the Colonial Corps arrives with an offer of freedom, and a chance to clear his name, Gideon doesn’t have to think twice. He takes her offer and with Elvis, his pet draco, on his shoulder, boards an airship bound for the city of Nike in search of revenge.

What he finds is plucky street-thief, a city steeped in corruption, and a seeming host of enemies determined to stop Gideon from discovering their deadly purpose—by any means necessary. Now Gideon finds himself involved in an entirely different kind of battle—a shadow war that, if he loses, could bring Fortune’s new and fragile peace to an explosive end.

And that’s just his first night in town.

Soldier of Fortune is the first Gideon Quinn Adventure. If you like down-at-heels heroes, quippy sidekicks, and roller-coaster action, you’ll love this free-wheeling mashup of science fantasy, steampunk, and comedy.