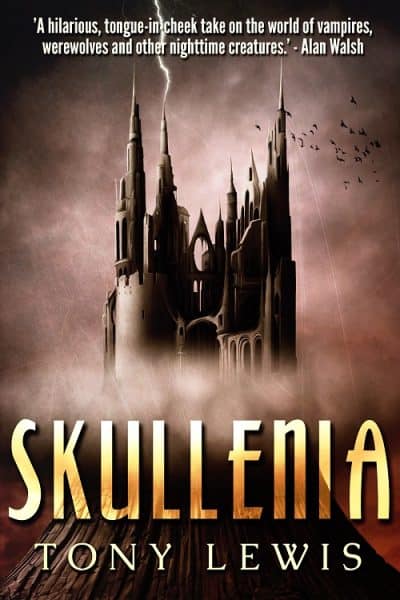 Tony Lewis’s Skullenia trilogy is a hilarious, supernatural escape. Welcome to the undead town of Skullenia, where Ollie and his detective agency work to solve strange mysteries.

Tony Lewis’s Skullenia trilogy is a hilarious, supernatural escape. Welcome to the undead town of Skullenia!

BOOK I: Wherewolf
Skullenia seems to be the last place that needs a detective agency. At least that’s what Ollie thinks, until Count Jocular commissions him to help resolve a series of unexplained disappearances.

Ollie is a half-vampire who inherits a detective agency in the undead town of Skullenia. He also inherits his uncle’s staff: a zombie who can barely hold himself together (in more ways than one), a reanimate the size of a phone box with an IQ to match, a mad professor, and their chain-smoking friend Ronnie who has the ability to make himself invisible.

Has Ollie bitten off more than he can chew? With the help of his motley crew and some quite frankly ridiculous characters, Ollie attempts to solve the perplexing mystery.

BOOK II: Cup and Sorcery
Ollie and his crew are back! The Fibulan Museum has been burglarized, and our intrepid detectives are appointed to solve the mystery, but they soon discover that this is no ordinary crime. During the course of their investigations, they find themselves undertaking a quest of quite literally epic proportions, in the hope that they will stave off disaster and avoid seeing Mrs. Ladle’s legs.

BOOK III: Wuthering Frights
Grendle the Shopkeeper has disappeared, and it’s up to Ollie’s crew to find him before it’s too late!

Narrowly missing a wandering splat of ectoplasm, or Bernard as he was more commonly known, Ronnie enters the shop to the clanging of the little silver bell that hangs over the door. His brow furrows as he absently scratches his cheek. Grendle always came out after the tolling of the first bell. Always.

Where was Grendle the Shopkeeper?

Later on, the local press interviews the Skullenian residents after an incident at the fountain, while a happy young couple discovers a dismembered corpse on their romantic, moonlit stroll through the cemetery. Are the strange events linked?

Someone’s going to have find out what’s going on, and in Skullenia that can only mean one thing. That’s right! Ollie and the boys have another puzzle to solve.