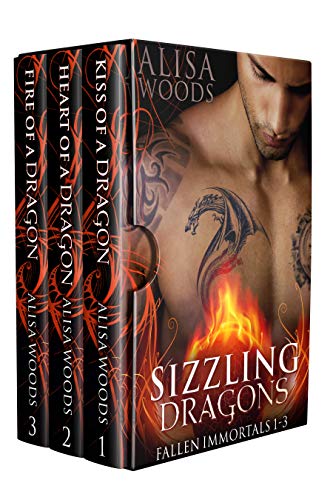 Limited-time, 3-book paranormal romance box set: When Dragon Prince Lucian rescues Arabella, he has to seduce her without losing his heart before he turns feral forever.

I am a Dragon Prince of the House of Smoke . . . and I am dying. Five hundred years is truly enough for a man like me. A monster. Yet a ten-thousand-year treaty will die with me, if I don’t spawn a dragonling to take my place. My two brothers are no use in this task. It falls to me, the eldest by a hair’s breadth, and yet, I cannot face the horror of another sealing. Another death. Another woman’s blood on my hands.

I was saved from death in a dark Seattle alley by an impossibly beautiful man who swooped in on golden wings. Now he’s taken me to his lair, opened my eyes to a world of immortals I didn’t know existed, and given me an impossible task—find him a mate. Then, and only then, will he set me free.

He needs her more than he wants; she wants him more than she should; and the fate of both the mortal and immortal worlds depends on not just repairing their hearts, but finding a Love that’s True . . .