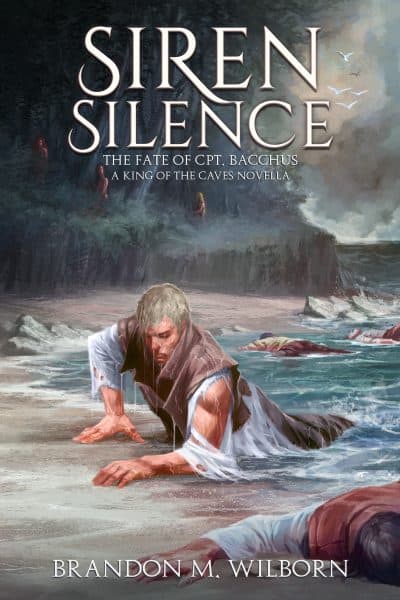 Siren Silence: The Fate of Cpt. Bacchus (A King of The Caves Novella)

Captain Dylan Bacchus leapt from his ship with grace in his limbs and poetry on his lips. But can any man survive the seductive siren’s call?

Young Kurian Abramson has been appointed King of the ten cities of Pallingham, but despite his first victory over the tyrant, Lord Evasius, he is far from claiming the throne. As the fight for the kingdom begins, Kurian is haunted by memories of his own narrow escape crossing Syrene Bay.

And guilt over losing Captain Bacchus.

Worse, his dreams bring visions of the vixens dancing and singing on the distant beach. Those who survive the sea suffer battle and bloodshed on shore.

One glimmer of hope shines through his nightmares: Bacchus might be alive.

Convinced this is a message from the man who named him king, Kurian and his friends must brave the dangers of Syrene Island to save the madman who thought he could cheat the siren song.

This dashing fantasy adventure novella combines the high epic fantasy of Tolkien with the deep allegory of C.S. Lewis to follow the compelling coming of age fantasy, The Treasure of Capric.

Siren Silence explores the dangers a young man may face when he accepts his calling and rediscovers the values on which he will stake his life.