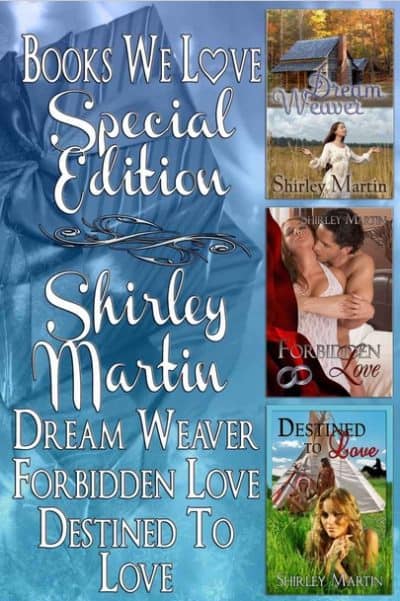 There are three romance novels in this collection. “Dream Weaver” is a time travel romance with a touch of the historical. “Forbidden Love” and “Destined to Love” are both historical romances.

Teacher Gwen Emrys has been experiencing some strange visions lately. She sees a man in a cabin in the woods. One of these visions almost causes Gwen to have an accident as it comes on her while she’s driving. Finally, Gwen decides to go visit a restored village. With a detailed map of Fort Pitt in her pocket, she becomes dizzy and blacks out. When she wakes up, she has no idea where she is. Everything has changed and she now finds herself in the middle of a woods. Her purse is gone, there are no cars, roads, or anything other than trees anywhere in the vicinity. Eventually, Gwen comes across a man—and not just any man, but the one from her visions. And so Gwen now finds herself back in the year 1762.

When Christian comes across a woman strangely dressed close to his home, he has no idea who she is. Of course, when she starts spouting some nonsense about coming from the future, he believes she’s slightly off her rocker. Even feeling this way, he is strangely drawn to her and decides to do some investigating of his own. The map of Fort Pitt she has with her also leads Christian to believe the woman might even be a French spy.

Will Gwen ever get back to her life in the twenty-first century? Was she brought back in time for a reason? What of this attraction she has for Christian? Is there hope for the two of them?

Married to a man she doesn’t love, Lisa lives a lie to saved her widowed mother from poverty. When she meets Owen, a steelworker from the wrong side of the tracks, heat sizzles between them, a passion that grows stronger with each stolen moment together. Lisa finds herself torn between her darkest desires and her family obligations.

Owen wants to better himself and escape the grinding brutality of the mill. But labor troubles—and love—intervene. After he meets Lisa, all he can think about is this woman whose image haunts him night and day. A woman whose husband will not release her from a loveless marriage.

Captured by the Indians as a child, Rebecca is torn between her love for her adoptive people and her yearning for the white man, Daniel Chamberlain.

In the midst of the French and Indian War, a time when no Englishman is safe, they find their love may not be enough to keep them together.