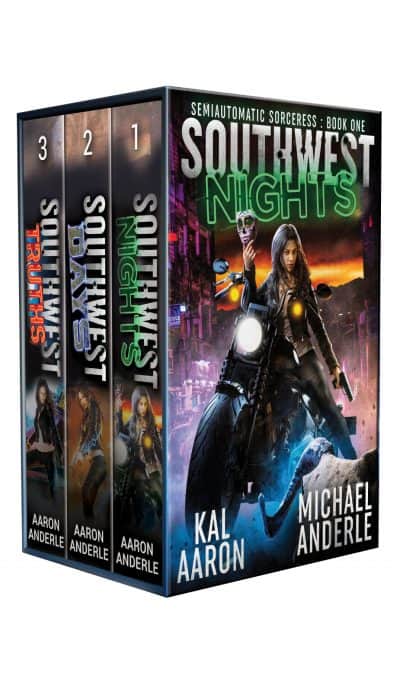 Get the first three books in the Semiautomatic Sorceress series for a great price to find out what’s myth or real.

Southwest Nights
Sorceress Lyssa likes her reality TV and strawberry ice cream, but her day job of hunting down rogues and criminals doesn’t leave her much time for either. And that’s when she’s not worrying about containing a powerful and dangerous spirit forced on her.

Paranoia is her other hobby, and it’s hard to burn away all evil in the world when she’s not sure if she’s working for the good guys. There’s also the small problem of people from her past popping up and trying to kill her.

When gangsters surprise her with powerful artifacts on what should have been a routine mission, Lyssa is drawn into an investigation that threatens to upend what she thinks she knows about her past.

With two enchanted guns and an attitude, this is one sorceress who isn’t going to let anyone stand in her way.

Southwest Days
They say there’s no rest for the wicked, but there’s even less for those hunting them.

A surprise message about Lyssa’s brother from the island home of the sorcerers destroys her new-found balance. She’s obsessed with finding out the truth about what happened to him, and that means investigating her own people.

Nothing gets done in the world of sorcery without calling on favors. When a report of a bizarre attack in southern Arizona surfaces, Lyssa has a chance to earn some political points and make the world a little safer. She never expects a quick investigation of an abandoned mine might turn into a fight for her life against bizarre creatures.

Evil comes in many forms, and a woman can’t always avoid a trap by knowing it’s coming.

It’s time for a monster hunt in southern Arizona, but Lyssa isn’t so sure the real monsters don’t walk on two legs.

Southwest Truths
Sometimes the only way out of trouble is blowing up everything and everyone around you.

When a mysterious enemy starts assassinating sorcerers, Lyssa ends up as their next target. Corruption stalks the Illuminated Society, and she’s unsure who among her so-called allies is plotting against her. It doesn’t help that as a woman who makes her living taking down dangerous criminals and terrorists, she’s built up a huge list of dirtbags who would gladly pay to see her dead.

What do you do when the truth doesn’t set you free?

Not one to wait around for trouble, Lyssa takes the fight to the enemy. When more conspiracies come to light, she’ll travel to the heart of the Society to uncover the dark secrets around her brother’s disappearance and the dangerous spirit she’s kept at her side for six years.

Lyssa isn’t ready to stop until the scum conspiring against her are destroyed. Blood and bullets will spill from Arizona to the Indian Ocean. It’s time for the Semiautomatic Sorceress to put her life and soul on the line.