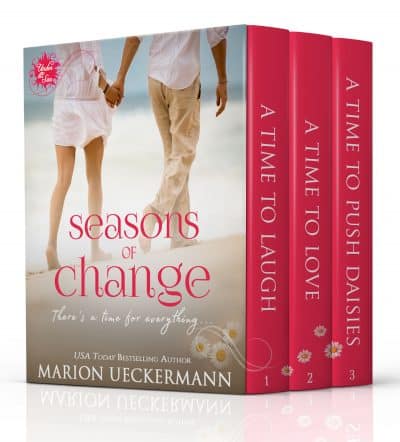 Seasons of Change (Under the Sun Books 1-3)

There’s a time for everything under the sun—a time to laugh, a time to love, and a time to push daisies. Follow the lives of friends and family in this three book series set in coastal South Africa, central Europe, and culminating with a cruise around the British Isles.

There’s a time for everything under the sun. A time to laugh, a time to love, and a time to push daisies.

Follow the lives of friends and family in this three book series that starts in a cozy coastal South African town before taking the reader on a journey to central Europe, culminating with the cruise of a lifetime around the British Isles.

A Time to Laugh
Brian and Elizabeth Dunham are faced with the possibility of a lifetime dream come true when Elizabeth’s best friend and neighbor jokes that Elizabeth’s sudden fatigue and nausea are symptoms of pregnancy. But would that be an old-age blessing or a curse?

A Time to Love
When Dr. Melanie Kerr’s worst nightmare becomes a reality, she packs her bags and catches a flight to Budapest. Jordan Stanson, the journalist and TV host who had documented Brian and Elizabeth’s late life pregnancy, turning it into a hit TV serial, follows Melanie to Europe. He has one more documentary to complete before Christmas—uncovering the tragedy surrounding the doctor the country came to love on his show, the beautiful Dr. Kerr.

A Time to Push Daisies
Eighteen months after being widowed, JoAnn Stanson is less than thrilled when her son arranges a luxury cruise around the British Isles as an early birthday gift. She’s not ready to move on and “meet new people.” Even so, she finds herself drawn to fellow traveler Caleb Blume. So many little things about Caleb remind her of her late husband. It’s like loving the same man twice. Yet different. Or is it?