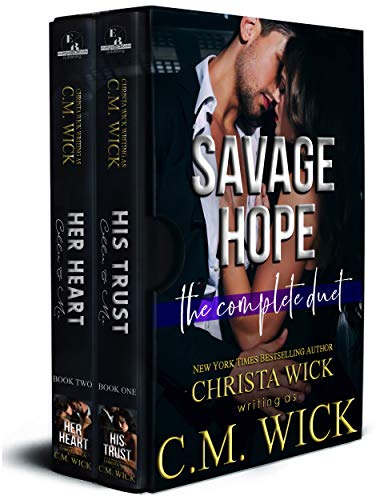 He thinks I’m a corporate spy. Me—plump, boring Mia James. Yes, I omitted an advanced degree on my resume, but being overqualified to be able to pay rent wasn’t how I was going to start my newly single (okay, newly dumped) life.

His Trust
He thinks I’m a corporate spy.

Me—plump, boring Mia James. Yes, I omitted an advanced degree on my resume, but being overqualified to be able to pay rent wasn’t how I was going to start my newly single (okay, newly dumped) life.

Do I regret doing it? Seeing as how I got a junior secretary position in my field, for the private military company run by billionaire CEO Collin Stark no less, I’m going to go with “no.” No regrets here. Which is what I basically tell Mr. Stark when he starts questioning my motives.

Did I mention he’s an ex-Army interrogator? Or that he’s too intense to put into words? While it’s obvious he doesn’t trust me, that’s probably a good thing. Because something tells me if that hot, hardened man were to ever fully trust a woman, his intensity level over her would be . . . off the charts.

She thinks I haven’t noticed her all this time. I’d have to be missing both a brain and functioning balls to overlook the quietly enigmatic woman who’s clearly too smart and skilled to be working in any entry-level capacity for me.

I don’t want to believe Mia’s capable of corporate espionage. But given the evidence, it’s hard to think otherwise. Not that I seem to be capable of a whole lot of rational thought when I’m around her. She’s my own curves-for-days kryptonite—which just makes her that much more dangerous.

Is it possible my enemies planted a woman in my company to seduce me (in the most awkwardly tempting way possible)? In the past, I would’ve said no way. But after getting a taste of just how hot Mia can burn, I’m starting to see it’s definitely possible . . . and worth it, either way.

Her Heart
I refuse to break. I can’t say that I’ve been through worse, but I still believe I’ll survive this. I’m not going to crumble at the seams. If I do, Collin’s enemies will have won. And everything we’ve both lost would have been for nothing.

I know it seems crazy to return to my old life and try to get a fresh start in a place with more bad memories than good, courtesy of my crook of a stepfather. But it’s all I have. And all I need. At least that’s what I keep telling myself.

. . . Until Collin bursts back into my life.

I refuse to let Mia suffer. I may know jack about healing—vengeance seems to be all I’m capable of right now—but that doesn’t mean I can’t protect her from more pain. God knows my world has caused her enough of that to last a lifetime.

I understand her need to start a new life. I even want that for her . . . even though I’m sure it’ll end up killing me and decimating my hopeless heart for good. But I’ll do anything for her. Even this. At least that’s what I keep telling myself.