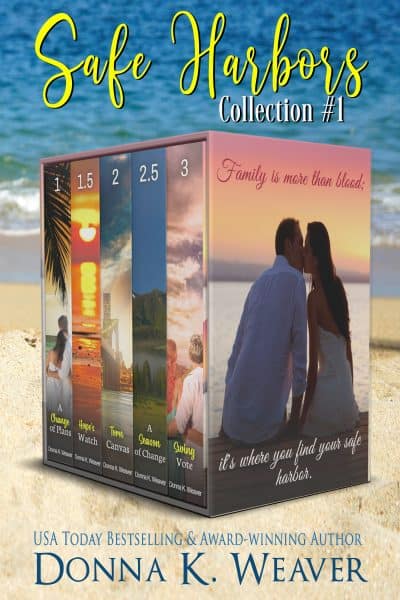 Family is more than blood; it’s where you find your safe harbors.

Family is more than blood; it’s where you find your safe harbors.

A Change of Plans, #1
Lyn wants to move on. She just doesn’t realize it will take pirates, shipwreck, and an intriguing surgeon to do it.

Hope’s Watch, #1.5
Elle finds that sometimes letting go means letting someone else in.

Torn Canvas, #2
After a faceoff with modern-day pirates, former model Jori faces months of reconstructive surgery. As Olivia learns about the man behind the scar, she become intrigued. But he’s no girl’s happily ever after. Yet.

A Season of Change, #2.5
Besides keeping his upcoming wedding from the press, he has to figure out how to tell one of his best friends, Marc North, that his girlfriend may not be what she appears.

Swing Vote, #3
​An IED blew up Marc’s career as a Cobra pilot. With a chance to fly again he must deal with his PTSD, local politics, and McKenzie, the hot election official.