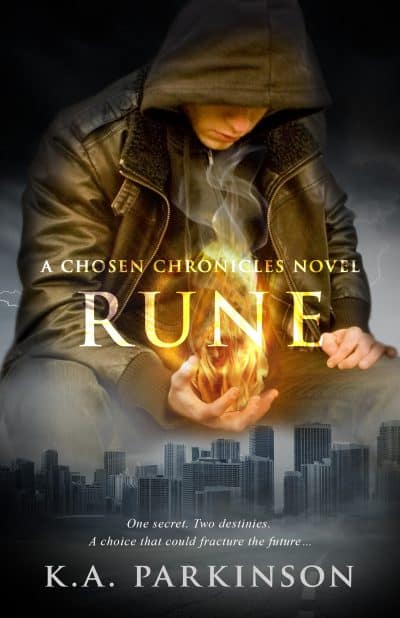 Rune has lived among a group Lost Ones, content fighting the Dark in his own way. But his ruthless Watcher has found him again and offers him a choice: fight against the most dangerous woman in the world, or risk losing the only people he’s ever truly loved.

One secret. Two destinies. A choice that could fracture the future.

The evening of his sixth birthday, Rune Amund stands bruised and bleeding at the local bus stop with a strange crystal glowing in his pocket and scorch marks on his palms. With nowhere else to turn, he follows Sorsha, the mysterious Watcher who arrives and claims she can train him to become one of the Chosen, those destined to destroy the monsters of the Dark. But when Sorsha shows her true colors, he’s forced to run again.

Eventually he finds Tokharian and the Lost Chosen. Years pass, and with the arrival of the beautiful redhead Keelyn, Rune finally begins to feel like he’s found where he belongs. But Sorsha, refusing to rest until her creation fulfills her twisted plans, has not stopped seeking her ward. And the night of Rune’s sixteenth birthday, she finds him.

The choice she offers leaves him only two options: fight against the most dangerous woman in the world, or risk losing the only people he’s ever truly loved.