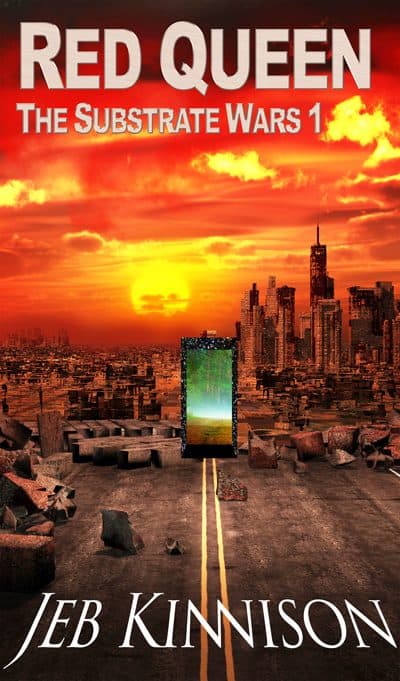 Future dictatorship meets student scientists in a fast-paced thriller. The idea of freedom and the right to self-determination are explored throughout the book as the students seek a refuge from the ubiquitous spying from Homeland Security.

They fought their governments… to free the world!

Red Queen is a science fiction thriller set in the US of a not-too-distant future, when the Bill of Rights is ignored and the US is run by the Unity Party, combining the worst of Democrats and Republicans.

Red Queen is a story about young people searching for freedom and agency in a world dominated by bureaucrats, administrators, and propagandists. The world of Red Queen is a police state with its roots in today’s events: post-9/11 warrantless physical and electronic surveillance; the erosion of personal liberties for supposed security reasons, even when the government’s actions are shown to be ineffective or wrongheaded; and the rise of a penal-industrial complex that imprisons one in three black men, often for victimless crimes. When the next terrorist action occurs, there may be calls for even more restrictions on freedom and privacy. That’s where Red Queen begins.

Justin Smith is a grad student studying simulated biology. He was home-schooled and read the classics of economics and history. He recognizes the police state for what it has become, but also knows to keep his head down;

Steve Duong is a child prodigy, self-educated in Vietnam, who has distinguished himself in mathematics and physics and is now researching advanced quantum computing. Steve makes a discovery that could change everything;

Samantha West is a daughter of West LA privilege, but is self-assured and knows what she wants—and she brings Justin into the cause;

Ben Ramirez leads the Students for Liberty, a student civil liberties organization, and believes in the tenets of the American Revolution and the Constitution and what they should mean to everyone.

This is Book 1 of the Substrate Wars series. The story starts on a California college campus just a decade from now. The world is post-terrorist disaster: repressive and censored, governed like China is today but with a stagnant economy and no jobs for young people. The students are cowed but not unaware, and they seize an opportunity when the government’s actions start to hit home even in academia. When they discover a new technology that could either free mankind or be the ultimate weapon for governments to control their citizens, they must decide what to do. Homeland Security and the Chinese government are one step behind; spies and traitors lurk in unexpected places. Who will determine how to use this great technology–free citizens or governmental bureaucrats?