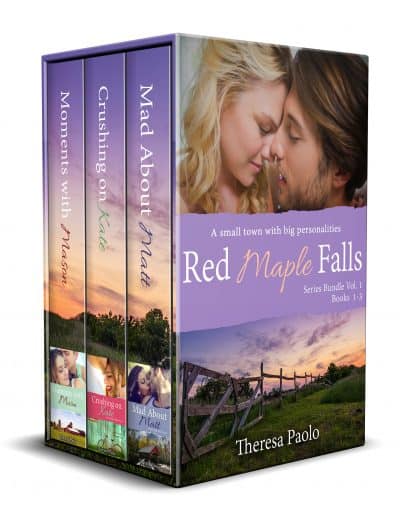 Love blooms in the New Hampshire town of Red Maple Falls in this utterly romantic collection of small-town love stories! Join the Hayes siblings as they each find love in the most unexpected of ways.

Matt and Shay
A hot cop and a sweet baker get a second chance at love in this small-town romance.

Seventeen years after Shay Michaels said goodbye to summers in Red Maple Falls and the only boy she ever truly loved, she’s back and the proud owner of Sweet Dreams Bakery. Life is good until someone breaks into her shop, making her question if the life she left behind in New York followed her.

As the local sheriff, Matt is keeping a close eye on the place and an even closer eye on the beautiful owner who refuses to take the break in seriously. Two conflicting personalities that burn bright on their own become down right explosive when thrown together. But in order to move toward a future together, they will have to let go of their past and accept the mistakes they made.

Kate and Caleb
It was love at first sight until he opened his mouth.

Born and raised in the small town of Red Maple Falls, it’s impossible for Kate Hayes to meet a guy she hasn’t known since first grade. When she is approached by a ridiculously attractive, unfamiliar face during one of her glass blowing demonstrations, she can’t help but get her hopes up. Until he opens his mouth.

Caleb James established his bike shop in the middle of nowhere to escape his past. When the owner of the adjoining business blocks his parking spots to put on her “arts and crafts hour,” he has no choice but to shut her down. What he doesn’t expect is the fresh-faced beauty who refuses to accommodate his requests. Nor does he expect for the small town to be filled with big personalities who feel the need to force their way into his life, refusing to leave him alone.

While Caleb continues to fight Kate, and tries to keep his distance, holding on to a vow he made to himself to never trust again, she tears down every wall he’s ever built. Will the promise of a future with Kate be enough to break the promise of his past?

Mason and Cassie
“Love was the enemy. But when she looked at Mason, she didn’t feel threatened, she felt hopeful.”

Barely hanging on after narrowly escaping an abusive relationship, Cassie Alan is running dangerously low on funds. After her job hunt comes up empty, she wishes for a miracle, only for the skies to turn black and dump on her. That pretty much sums up her life. But then he shows up. With the promise of a warm truck and a list of people who would vouch he’s not a serial killer, Cassie accepts the ride. What she doesn’t expect is for her entire life to change when she steps into the old truck.

New business owner Mason Hayes has a very strict rule: Do not mix business and pleasure. Until he hires the beautiful rain-soaked girl he rescued on the side of the road and finds it impossible to resist her. With each innocent touch and passion-fueled gaze, his desires only grow. Afraid to scare her away and determined to gain Cassie’s trust, Mason gives Cassie complete control over the pace of their budding relationship.

As Cassie slowly opens up, revealing her dark past and shameful secrets, Mason sees beyond the scars to the strong fighter she really is. But when the past she ran away from threatens their happily ever after, will Cassie find the strength Mason sees in her to fight back?