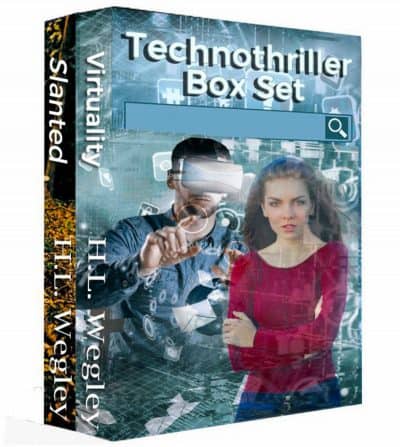 Virtuality: Could Professor Scoggins be right—that in the wrong hands, Virtuality’s technology could shred the fabric of civilization? Slanted: Americans are drowning in information with no clue that it will soon steal their nation and their liberty.

Virtuality
Jessica (Jess) Jamison is a genius, a beautiful, highly introverted, young woman who can count her friends on her thumbs. Seven years ago, Vince left, shattering her heart. Now Jess has a Computer Science degree and still prays her childhood soulmate will come home. If he’s willing to reconcile their relationship, Jess can help Vince take the reins of Virtuality. But why is someone trying to kill Vince and her? And could Professor Scoggins be right—that in the wrong hands, Virtuality’s technology could shred the fabric of civilization and that stopping it may literally take an act of Congress?

Virtuality is a character-driven thriller with romance about dangerous technology lurking on the near horizon—a story of love and sacrifice, illustrating that there are no shadowed, worthless people in God’s economy.

Slanted
Americans are drowning in information with no clue that it will soon steal their nation and their liberty.

When AJ Scott finds an orphaned girl, Sam, crying, hidden in some bushes along the Rogue River, AJ commits to helping Sam, but she soon finds herself and Sam in a road race with killers in pursuit.

Hunter Jones, Sam’s guardian, is a big data analyst and will soon release a research report proving that the largest Internet search engine is being used to influence American political thought including the next election. He hints at his findings in a radio interview, and within hours, a team of hired killers attacks. Hunter hides Sam and tries to elude the killers. But when he returns, Sam is gone.

Slanted is a thriller with a bit of romance that clearly illustrates the influence of search engine technology on all Americans.