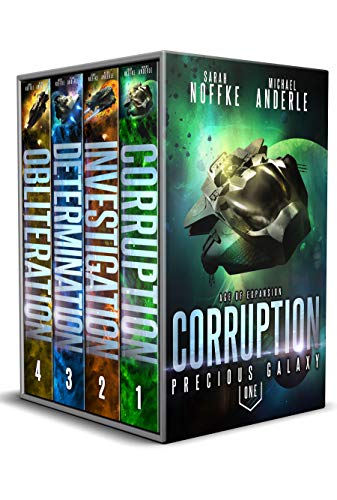 After an explosion, the crew of a battlecruiser mysteriously disappears. A new evil lurks in the darkness. Over 100 reviews on the individual books!

After an explosion, the crew of a battlecruiser mysteriously disappears.

Corruption
After an explosion, the crew of a battlecruiser mysteriously disappears.

Bailey and Lewis, complete strangers, find themselves suddenly onboard the damaged ship. Lewis hasn’t worked a case in years, not since the final one broke his spirit and his bank account. The last thing Bailey remembers is preparing to take down a fugitive on Onyx Station.

Mysteries are harder to solve when there’s no evidence left behind.

Bailey and Lewis don’t know how they got onboard Ricky Bobby or why. However, they quickly learn that whatever was responsible for the explosion and disappearance of the crew is still on the ship.

Monsters are real and what this one can do changes everything.

The new team bands together to discover what happened and how to fight the monster lurking in the bottom of the battlecruiser.

Investigation
A new evil lurks in the darkness.

The missing crew of Ricky Bobby are being held in the Precious Galaxy.

The rescue team must quickly orient themselves with this new territory, which isn’t governed by Federation law. The neighboring natives are on the defense, having recently been attacked by a strange, black monster.

More startling, the population of an entire planet has been wiped out. Once again, no trace left behind.

Bailey and Lewis know where the databases are located that hold the crew. However, Solomon Vance isn’t making this easy.

An important factor is missing. Without it, the rescue efforts are futile.

When Monstre and Starboards Corp learn that the new team is after them, it’s a race to rescue the crew before the game completely changes. Solomon Vance has power, technology, and a monster that does his bidding.

Determination
Bailey and Lewis are more determined than ever to find Ricky Bobby’s missing crew.

Monstre Corp knows they are on the hunt, and Solomon Vance isn’t letting them get close.

The monster is still out there, a threat they can’t stop.

Jack decides the only way to win is to fake their own deaths.

If Vance believes they’re dead, he’ll let down his guard.

An epic battle ensues when the crew returns to Starboards Corp with two missions: free the children and take down the evil corporation. Timing is everything. And not getting blown up is absolutely key.

Obliteration
The crew is relieved by Dejoure’s perplexing ability to soothe the monster, but that won’t keep them safe for long.

Someone wants to take out the biggest giant in the galaxy.

The team goes after the other databases only to learn something that changes everything.

Vance is always one step ahead of them.

Not all hope is lost. Hatch brings back a key crew member; someone who can help them defeat Monstre Corp.

The last act of this heart-pounding series delivers a ton of action as Bailey and Lewis rush to save the crew before it’s too late. Everyone’s freedom is at stake. Vance would rather go down in a blaze, taking everything with him, than be defeated.