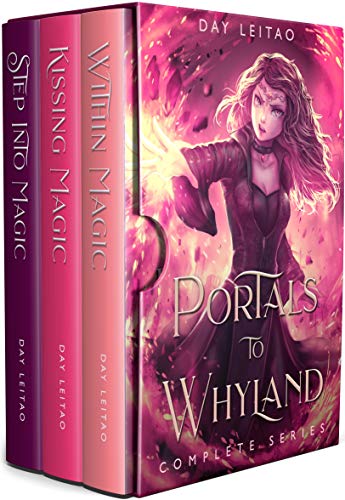 From magic shoes to magic kisses. Special, scary shoes become Karina’s ticket to Whyland, a kingdom in another dimension, where she finds magic, friendship, and complicated love. Over 90 reviews on the individual books!

From magic shoes to magic kisses

Never accept invitations to other worlds from strangers. When Karina realizes that, she’s already in Whyland, a kingdom in another dimension, running for her life, with no idea who to trust.

She came to help a princess defeat a witch, but when both rebels and the king are after them, Karina’s only way out might be by using the magic in her power, which she barely understands. To make matters worse, the princess’s boyfriend, almost-boyfriend, or whatever, has dubious alliances, and it might be their doom.

Then there’s the mysterious Sian, who’s intent on conquering the kingdom. He’s greedy, cunning, and selfish—and fascinating. And that’s the part that complicates it all.

Alternate dimensions, mysterious magic, strange castles, complicated romances, friendships between girls, first kisses, and teen angst. You can find all that and more in Portals to Whyland, a YA portal fantasy series for readers 13 and older.