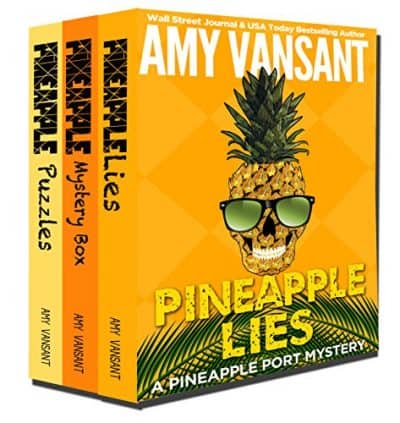 Book One: Pineapple Lies
Growing up in one of Florida’s fifty-five plus communities, Charlotte never expected life to be wild. Golf cart racing with her surrogate mothers Mariska and Darla was about as nutty as life got . . . until she found the hot pawnbroker’s mom buried in her backyard.

Armed with nothing but her wits, Pineapple Port’s questionable cast of characters and a growing crush, Charlotte is determined to solve the mystery of Declan’s mother’s murder.

Hey, at least this guy’s skeletons aren't in his closet.

Book Two: Pineapple Mystery Box
When a giant inflatable Halloween witch goes missing in the Pineapple Port retirement community, Charlotte’s eager to nab the culprit. Before she can lift a fingerprint, someone threatens to kill a new neighbor who looks like an adorable Pomeranian but possesses a disturbing talent for revenge. Moments later, a stranger demands the return of a mysterious wooden box . . . or else.

Charlotte's boyfriend, Declan, isn't having a great morning either. His calculating ex-girlfriend has returned to claim she's the rightful owner of his pawn shop. She’s livid he’s found a new lady, too.

Eh. Things could be worse. At least Charlotte doesn’t know that a mojito-swilling killer who fed his grandmother to a cat is on his way to Pineapple Port . . .

Book Three: Pineapple Puzzles
The infamous Puzzle Killer returns to Charity, Florida, in search of a rival murderer, and when two serial killers battle, Charlotte, Declan, Seamus, and a naked cat find themselves on the chopping block!